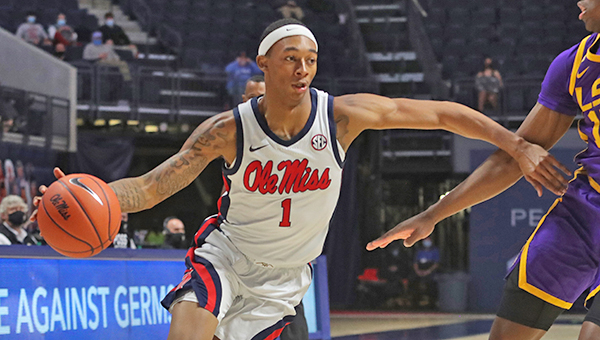 Ole Miss men’s basketball coach Kermit Davis has been busy this week. Besides getting the Rebels ready for two big Southeastern Conference games — one of which was eventually canceled — he spent time trudging up sled hills with his daughter and organizing car pools for his players.

The winter storm that struck Mississippi this week left most of the state, including Oxford, iced over and shut down. The Rebels still managed to get to practice thanks to the efforts of Davis and his staff, who wrangled up as many four-wheel drive vehicles as they could to traverse the ice.

“They didn’t move. They got some extra sleep in and we told them not to get behind any wheels and drive out,” Davis said of his players. “There’s one thing we do have an abundance of in Mississippi, and that’s four-wheel drive trucks. We’ve got that covered.”

Lately, Ole Miss (12-8, 7-6 SEC) has had winning covered as well. They’re riding a four-game winning streak that includes two victories over top 10 teams, as they welcome Mississippi State (11-11, 5-8) into The Pavilion Saturday at 5 p.m.

The Bulldogs have lost two in a row and six of their last eight, and are as desperate to break out of their funk as Ole Miss is to continue its roll.

“Huge game for us and I know a huge game for them. It’s a game I know both teams are looking forward to playing,” Davis said.

More than anything, the 264th meeting between the Bulldogs and Rebels might be celebrated as a chance to play anyone. Mississippi State’s scheduled road trip to

“I think if anything, the timing of having your archrival the next game meant there wasn’t much letdown because everybody is looking forward to playing Mississippi State,” he said.

Earlier in the week, Mississippi State coach Ben Howland said a day or two off this time of year can help a team.

“I think our guys are actually going to benefit, to be honest with you, having the last two days off,” Howland said on Monday. “Some of these guys have played so many minutes. Sometimes, when you get two days off for your legs, it can really help you. I’m hoping that will be the case. Also, just trying to reflect mentally about some of the things that we’ve talked about as a group yesterday.”

While Mississippi State is trying to pull out of a tailspin, Ole Miss is attempting to play its way into the NCAA Tournament picture. Wins over top 10 teams Tennessee and Missouri during the recent winning streak raised the Rebels’ profile, and with four games left in the regular season there is not time to ease off the throttle.

“The beauty of the SEC and playing in a Power 5 conference is you keep getting the opportunity to play good teams and we’ve got some opportunities to do that,” Davis said. “We’re chasing. We’re still chasing. We’re on the outside. We’ve made up some ground. What we’ve got to do is control every day. You can’t just be hungry to play this time of year, you have to be hungry to practice. I think our guys understand what’s at stake this time of the year, especially a team like us that’s chasing the bubble.”