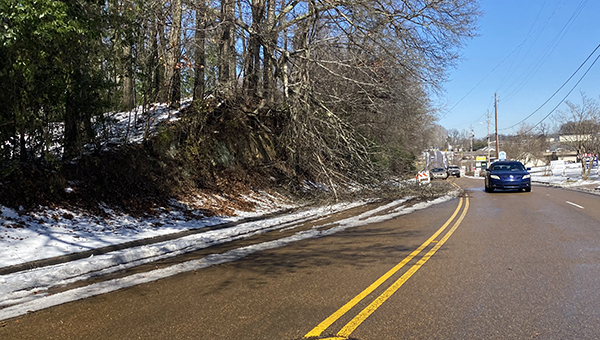 A car navigates around a tree on Mission 66 Saturday afternoon. While much of the road is open, portions of the road are partially blocked by fallen trees and limbs. (Tim Reeves/The Vicksburg Post)

Mayor George Flaggs Jr. said he is lifting the city’s hiring freeze approved by the Board of Mayor and Aldermen in 2017 to hire more public works employees.

“We’ve got to hire more public works employees to find and fix the water leaks (in the city water system),” Flaggs said Saturday. He said he will ask the board to lift the freeze when it meets Monday.

The board established the hiring freeze in 2017 as a cost-cutting measure and renewed it each year since, but broken and leaking water pipes caused by six days of subfreezing weather has overwhelmed the city’s existing manpower.

Despite the problem, Flaggs said water system is slowly coming back to normal.

“We’re up to 80 percent (service) but it’s slow. We’re trying to build up pressure but it’s hard when everybody’s using water and we still have leaks,” he said. “We’ve got our guys out there looking.”

Flaggs said he is in touch with Entergy officials “and they are sending 12 more crews in to help restore service. The cold weather has moved out, worst is behind us and we’re going to be moving ahead.”

Entergy customer service representative Shelia McKinnis said 4,686 customers remained without power in the county. The largest number, she said, is in the Sky Farm Avenue area with the rest scattered around the county.

She said 22 crews are in the area, but they have been unable to stay at Vicksburg hotels, which are full of area residents who have no power or water. The crews are having to stay in hotels about three hours away, McKinnis said.

Authorities said the sunshine and warmer temperatures are beginning to cause the ice on the area’s major streets to melt. Temperatures for Saturday are forecast to reach the upper 40s or lower 50s and into the upper 50s Sunday.

“The roads are getting better except for the side streets and side roads that haven’t been traveled much,” Warren County Emergency Management Director John Elfer said. “Conditions are improving, stores are opening up and people are trying to get back to something normal.

“Once we can get the temperature up near 50, I believe things will start improving and we can move this out of here.”

Vicksburg Police Chief Milton Moore said the city’s major streets are in good condition but some of the city’s side streets remain iced over.

“It’s getting better,” Warren County Sheriff Martin Pace said. “We’re having a bit of a melt and we may have the first opportunity to see the light at the end of the tunnel.

The main roads are melting but some of the less-traveled rural roads still have ice on them,” he said. “We’re seeing more traffic on the roads as people are feeling more comfortable getting out.

“If we can get about three hours of sun and temperatures above freezing we may see some significant melting by the end of the day,” he said.

But while road conditions are improving, Pace said people still need to exercise caution because some icy patches may still remain. Someone may be traveling on a good road and then suddenly transition onto a patch of ice.

“They need to be careful,” he said.