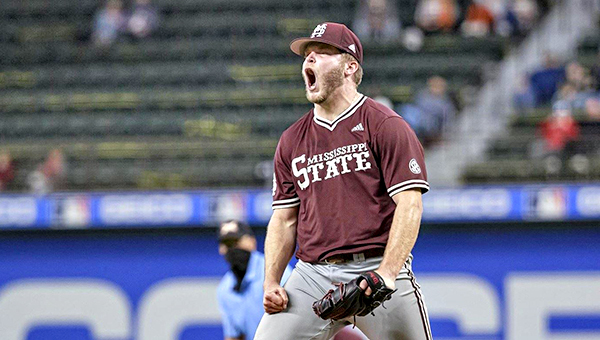 ARLINGTON, Texas — Baseball blue bloods matched up in the opening game of the 2021 State Farm College Baseball Showdown, but this one wound up wrapped in maroon and white.

Four Mississippi State pitchers combined for 18 strikeouts, while Luke Hancock and Rowdey Jordan both homered to lead No. 8 Mississippi State to an 8-3 win over Texas in the season opener for both teams on Saturday.

Landon Sims struck out 10 batters in four innings of relief for the Bulldogs. He did not allow a hit or walk a batter, and earned the win.

Christian MacLeod started and had seven strikeouts in four innings, and wound up with a no-decision. He gave up on run, on six hits and no walks.

Adding Riley Self’s one strikeout in the ninth, Mississippi State tied for its most strikeouts in a game since Feb. 19, 2012 against Washington State (19). State last struck out 18 batters in a game on Feb. 26, 2020 against Alcorn State.

At the plate, Luke Hancock opened the season with a 3-for-4 showing. He hit his first career home run in the fourth inning, drove in another run in the fifth, and singled again in the seventh. He scored twice, plated two RBIs and walked once.

Jordan plated one RBI in the sixth inning before he homered in the eighth. Josh Hatcher extended his hitting streak to eight games with an RBI double in the eighth inning. Landon Jordan reached base three times, drove in a run and scored once.

Van Cleve doubled in two runs and scored during a four-run second inning that propelled the Rebels to the win.

TCU answered with three runs in the bottom of the second, but Ole Miss’ bullpen kept the Horned Frogs at bay the rest of the way.

Jackson Kimbrell, Drew McDaniel and Taylor Boradway combined for 7 1/2 innings of shutout relief after starter Doug Nikhazy was knocked out of the game in the second inning.

The three relievers had 10 strikeouts, walked two batters and scattered five hits. Kimbrell earned the win, while Broadway pitched the last four innings for a save.
Ole Miss will play No. 3 Texas Tech Sunday at 3 p.m., and No. 9 Texas Monday at 2:30 p.m.