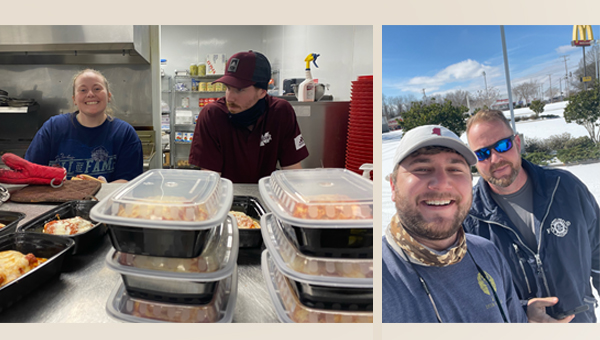 Last week’s brutal ice storm arrived in Vicksburg and Warren County on Sunday, and didn’t let up until the following Saturday.

For a week, the community became a virtual ghost town — except for the first responders who were out providing assistance to those in need and the Entergy crews that were called out to restore power caused by the weather.

These men and women worked tirelessly, as did the essential workers in nursing home facilities and the hospital, many of whom had to be shuttled in by first responders.

In the midst of the storm, several local eateries decided to do what they could by making meals for those hard at work.

“Being at home all week with absolutely nothing to do, I was going stir crazy,” Billy’s Italian Restaurant manager Kacie Whittington said. “And all I could think about was work, so I thought, ‘You know all the food is going to go bad if we don’t serve it soon,’” so why not put it to good use.

Because Whittington’s stepfather works for the police department, she was well aware of the fact they didn’t have anything to eat. No restaurants were open during the storm.

Therefore, Whittington called Tyann Ellis, the owner of Billy’s, and asked if they could prepare meals for the first responders.

The answer was yes and Whittington, along with three other employees, made about 200 meals.

“We even had a busboy that I had cooking with me,” Whittington said. “He really stepped up and helped out,” she said, as well as the other two employees who were willing to get out in the “mess.”

Mike Roach, owner of the local McDonald’s franchise, said he was also appreciative of his managers who were willing to come in and work so they, too, could provide food to the essential workers.

“It was gratifying that they accepted to come in and help because they could have said no,” Roach said.

It was also heartwarming, he said, when he delivered the hot hamburgers.

“It was overwhelming,” Roach said of the workers’ reactions. “They were so grateful.”

Roach said he and his family enjoy doing their “part in the world.”

“We are not here to get praise and glory. We are the type of people that follow what the Lord says and we are blessed and were able to help,” he said.

Fit Chef owner Kevin Roberts was another who took it upon himself to help out.

“When I see a need I do what I can to fill that need, so I was just doing the only thing I know how to do — cook,” Roberts said.

Due to the weather making it impossible for some to get out, Roberts said he worked with a limited crew. They were still able to prepare and deliver more than a thousand meals to first responders, hospital and nursing home staff, and Entergy crews.

“What those guys (Entergy crews) are going through to restore energy is brutal. They are out there in subfreezing temperatures and knowing the best thing they look forward to is coming in to get a real quick hot meal. That’s what gives me a comforting feeling — knowing that I am at least helping these guys and serving a purpose,” Roberts said.

In addition to Entergy crews, first responders, hospital and nursing home staff, Roberts said some meals were given to people stuck at home with no way to get out.

“All of it was so much appreciated,” Warren County Emergency Management Agency Director John Elfer said.

“And it was such a tremendous relief for all of us. We get to going in emergency response mode and sometimes you forget to take care of yourself. You realize after 12 hours have gone by you haven’t had anything to eat, and for the people like at 911, they’re in a building, they couldn’t leave and if they could have nothing was open — nothing,” Elfer said.

What was also appreciated and impressive, Elfer said, was that Vicksburg’s restaurant community did this of its own free will.

“We didn’t have to ask them, they reached out to us,” he said.

While Whittington, Roach, Elfer and Roberts each lauded the Vicksburg community, Roberts summed it up by saying, “During regular life, everybody has their own opinion of how things should be done and that causes people to have negative responses, but during this situation when survival is the only option that is when people come together to help.”

The Warren County grand jury has handed down a two-count indictment charging a Vicksburg man in an August drive-by shooting.... read more