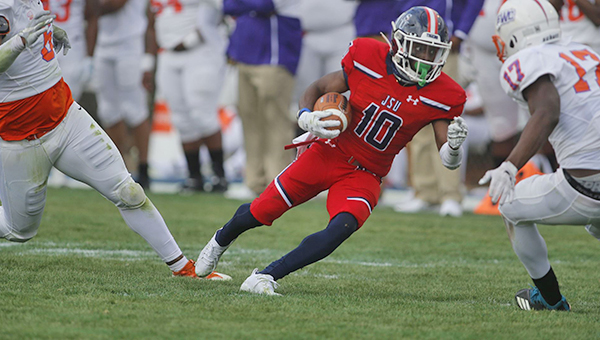 The result quickly took a backseat, however, to a confusing sequence of events afterward.

Sanders said that, during the game, someone broke into his office at Veterans Memorial Stadium and stole his cell phone, wallet and credit cards.

A short time later, Jackson State officials released a statement saying the “belongings were misplaced and have been found.” without offering any other explanation.

“When I talk about quality and raising the standards, that goes for everyone, man. Not just the people on the field, not just the coaches, not just the teachers, not just the faculty, but everybody. Security and everybody,” Sanders said after the game, and before the items had been located.

“How do you think it feels? Coming back, teary-eyed because the guys had presented me with the game ball. One of the best moments I had in my professional sports career emotionally,” Sanders continued. “And then you go into your locker room and you notice you don’t even have a phone to call your momma, your girl, your kids, because it’s been stolen. You don’t even have the Scully hat that you wore here. We’re gonna find out who did it.”

“Immediately following our win today, several items belonging to Coach Prime were taken from the locker room. Those items were quickly recovered and returned. While we consider this an isolated incident, we are thoroughly reviewing security protocols to ensure this does not happen again,” Robinson said. “However, we refuse to let this dampen the victory for our JSU Tigers, who have worked hard for this moment. We want them to enjoy this time, as we look forward to more game-winning celebrations in the future.”

While someone might or might not have been running around the bowels of Memorial Stadium, the Tigers were running all over Edward Waters on the field.

Jalon Jones completed 18 of 20 passes for 187 yards, with three touchdowns and no interceptions for the Tigers. He added 39 rushing yards and a touchdown.

Jackson State finished with 183 rushing yards as a tean, and 435 yards of total offense.

Jackson State dominated, scoring on its opening drive and adding two more touchdowns in 67 seconds, wrapped around an Edward Waters fumble on a kickoff, to end the first half 31-0.

Cornerback Alexander Shaw, a former Warren Central star, had one tackle and a forced fumble.

“It felt so great to play today.” Baldwin said. “When I got to the stadium and ran onto the field and seeing our supporters, I was like ‘yes, yes this feels like gameday’ and that’s when it finally hit home. It took a lot of people to make this game happen within the athletic department, the university and we are thankful for the opportunity to compete.”

HATTIESBURG — Southern Miss turned in a season-opening performance that was well worth the wait. Hunter Stanley racked up 13... read more