TCU holds off Mississippi State in the ninth 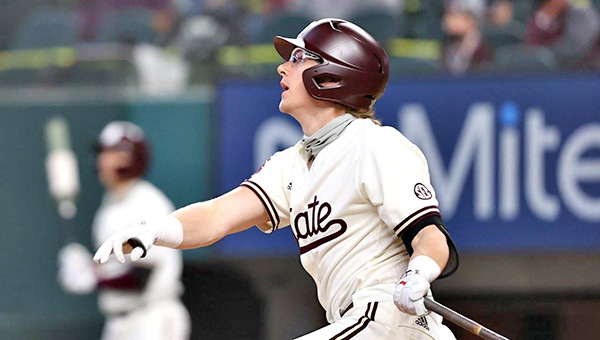 ARLINGTON, Texas — A ninth-inning rally came up one run short for Mississippi State on Sunday.

The Bulldogs had the bases loaded, but Drew McGowan hit into a game-ending double play that allowed No. 13 TCU to escape with a 3-2 victory in the State Farm College Baseball Showdown.

Tommy Sacco drove in a run and scored another for TCU (1-1), but the game was dominated by the two pitching staffs.

Russell Smith and Marcelo Perez combined to strike out 11 batters for TCU. Garrett Wright faced two batters in the ninth to earn his first save of the season.

Wright entered the game with runners on first and third, and TCU clinging to a 3-2 lead. He walked Scotty Dubrule on four pitches to lead the bases, and then got McGowan to hit a ground ball to second base, starting the double play that ended the game.

Josh Hatcher went 2-for-4 for Mississippi State (1-1), including an RBI single in the ninth inning. Luke Hancock also had two hits for the Bulldogs and Rowdey Jordan hit a solo home run.

Houston Harding started on the mound for Mississippi State and took the loss. He allowed one unearned run on one hit and three walks, while striking out four in 3 1/3 innings.

Harding was the first of six pitchers used by the Bulldogs. They combined to walk seven batters and struck out eight.

Mississippi State will finish its three-game run at Globe Life Field when it takes on Texas Tech Monday at 11 a.m.