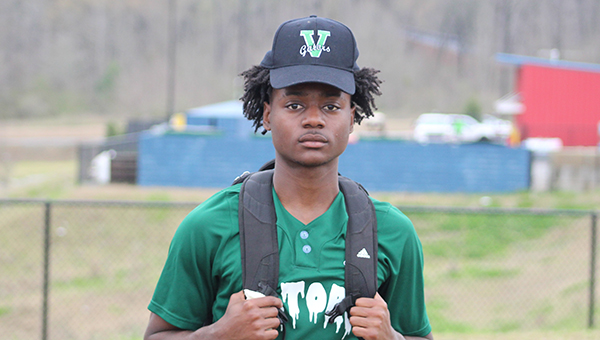 Vicksburg High baseball player Derrick Brown was 2-for-4 with two doubles and three RBIs in a 16-3 win over Laurel on Tuesday.

The Vicksburg Gators got back on the field, got a big win, and might have found a new hitting star — in other words, just about everything they could have hoped for in a season opener.

Datreion Kelly went 4-for-4 with two doubles, a triple, six RBIs and three runs scored, and the Gators hammered out 17 hits as they crushed Laurel 16-3 on Tuesday.

Nine of Vicksburg’s hits went for extra bases. Derrick Brown was 2-for-4 with two doubles and three RBIs, while Rashad McCroy tripled twice and scored two runs. Chris Green also had two hits and scored a pair of runs. Terrance Johnson finished 3-for-5 with a double and one RBI.

McCroy hit an RBI triple and Kelly a two-run single during a seven-run third inning that gave Vicksburg a 9-0 lead. Brown doubled and scored on a base hit by Johnson in the fifth inning. In the sixth, Kelly hit a bases-clearing triple to key a five-run rally.

Laurence Sullivan pitched four innings to earn the win. He only allowed one hit and two runs while striking out four, but did walk six batters. Tyler Sanders pitched the last two innings and recorded three strikeouts.

Vicksburg will return to action Friday at 6 p.m., when it heads across town to face Porter’s Chapel Academy.

Taylor Osborne hit an RBI triple and scored a run during the big sixth inning, and finished with two hits for PCA (1-1). John Wyatt Massey was 2-for-2 with a double and two RBIs, while Chase Hearn drove in two runs and Ricky Carraway scored two.

Osborne also pitched 3 1/3 innings and allowed three runs, two earned, while getting a no-decision. Gage Palmer worked 2 2/3 scoreless innings in relief to get the win. He struck out four, walked two, and did not allow a hit.

Warren Central has not lost a softball game in nearly two years. It still hasn’t won one, however, in almost... read more