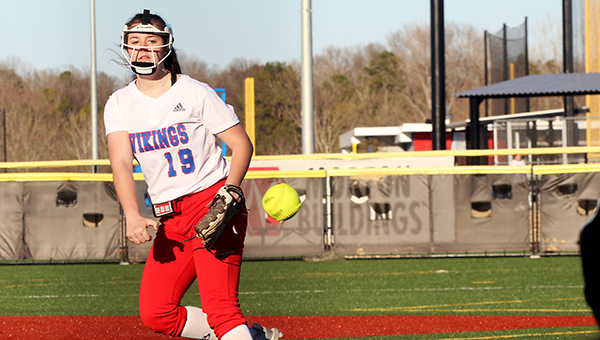 Warren Central pitcher Abby Morgan delivers Tuesday against Wesson. The teams played to a 3-3 tie when the game was called because of darkness. (Tim Reeves/The Vicksburg Post)

Warren Central has not lost a softball game in nearly two years. It still hasn’t won one, however, in almost a year.

The Lady Vikes opened the season with a 3-3 tie against Wesson on Tuesday, when the game was called after four innings because of darkness. The game was played on a field at Sports Force Parks that does not have lights.

While a tie was unsatisfying, Warren Central coach Dana McGivney joked that there were worse outcomes.

Abby Morgan had two hits and drove in two runs, and also pitched four solid innings for the Lady Vikes, who were undefeated when the 2020 season was cut short by the COVID-19 pandemic.

Morgan allowed three runs on six hits and three walks. At the plate, she hit an RBI double in the first inning and an RBI single in the third. The single tied the game at 3.

“I thought she pitched well. There were some pitches that were close that could have been called strikes, but that’s the nature of the beast. She looked good,” McGivney said.

The Lady Vikes banged out six hits offensively, but also left six runners on base. They had a chance to win it in the bottom of the fourth, with two runners on and darkness closing in, but couldn’t score.

Warren Central lost four starters from last year’s squad, and McGivney said she plans to spend the early part of the season tinkering with lineups to find the right combination of players. The Lady Vikes play again Thursday at Franklin County, and then have a varsity doubleheader Friday at 3:30 p.m. against Florence. Friday’s game is at Sports Force Parks.

“Probably for the first two or three weeks we’re going to be looking at different lineups, trying to figure things out and what works best,” McGivney said. “I definitely thought our hitting was not where it needed to be tonight. Defensively, there were a few things I didn’t like but overall we didn’t look bad. We just have to improve our hitting.”

McClellan struck out six batters, walked one, and only gave up singles to Lili Kistler and Kellisia Walker.

Lexi Kistler was also solid in the pitcher’s circle for Vicksburg. She allowed six hits and five walks, but limited the damage to only three runs in six innings.

Vicksburg will travel to play Loyd Star Thursday at 6:30 p.m.