Neshoba Central knocks Missy Gators out of Class 5A playoffs 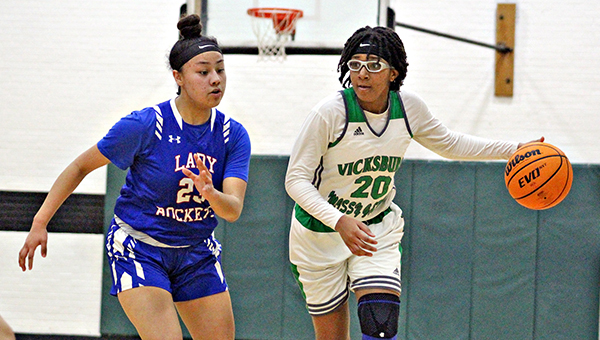 The Vicksburg Missy Gators are a great team, who had a great season, and proudly boasted a top-five ranking in MHSAA Class 5A entering the state playoffs.

Unfortunately, they had to face another team with a nearly identical resumé right off the bat — and only one of them got to leave Vicksburg Junior High’s gym with its state championship hopes intact.

Hama’ya Fielder scored 26 points, and Neshoba Central held the Missy Gators to one field goal in the last 4 ½ minutes to win 73-66 in the second round of the Class 5A girls’ basketball state tournament on Wednesday.

Neshoba Central advanced to play Cleveland Central in the third round on Friday.

“It really hurts. Even though we were playing the top two or three teams on this route we had, I fully expected to be playing. I still think, right now, with my team the parts are greater than anybody else’s,” Vicksburg coach Troy Stewart said. “Too many mistakes down the stretch. That hurt.”

The Missy Gators followed up last season’s run to the Class 5A semifinals by posting a 16-7 record, winning their second consecutive Region 4-5A tournament championship, and earning a top-rive ranking in Class 5A by three different statewide polls.

They faced a difficult road to get back to the deep water of the state tournament — Neshoba Central (19-5), which is ranked No. 1 in Class 5A by Maxpreps.com, was the first of three top-five teams they’d have had to go through to win a title — but what they did accomplish was not lost on Stewart or his players.

“It was actually a great year,” said junior guard Destini Sims, who scored nine points against Neshoba Central. “Coming from last year, making it to the semifinals, it’s kind of sad we couldn’t get that far but I know me and my team played our best.”

The seeds of Vicksburg’s defeat Wednesday night were planted in a foul-filled first half. Both teams were in the bonus by the end of the first quarter, but Neshoba Central took advantage of the situation while the Missy Gators did not.

“We missed 12 in the first half, and six or seven in the second half, and we lose by seven. We’re there. We just have to put it together,” Stewart said.

Despite the missed opportunities early, and plenty of adversity in the second half, the Missy Gators were in the game right to the end. Layla Carter scored a game-high 31 points while battling leg cramps, and Sims was in and out of the lineup after suffering a leg injury midway through the fourth quarter.

“It killed the rotation,” Stewart said of the foul trouble. “I want to keep two or three of my solid ballhandlers and scorers out there. You don’t get that opportunity when you’re in foul trouble, so it messes the entire rotation up.”

The teams traded runs for most of the second half, until Neshoba Central put together the last and most decisive one.

Vicksburg trimmed a seven-point deficit to one, 63-62, on a steal and layup by Carter with 4:31 left, and then went cold. Another basket by Carter with 42 seconds to go and two free throws were the only points it scored the rest of the way.

The Missy Gators committed two turnovers and missed four shots in the last 90 seconds, while Neshoba Central made four free throws in that same span to close it out.

Jalesiya Jim finished with 10 points for Neshoba Central, while Shaylynn Hunter and Shante Beaulieu had nine apiece. Hunter went 7-for-8 from the free throw line.

“Free throws and those steals down the stretch that we didn’t convert on, those layups we missed, that kills you in a tight game like this,” Stewart said. “Against a team that’s coached and plays as well as they do, when you miss those it takes the wind out of you and it’s hard to bounce back because that team is going to play just as hard. But we played as hard as we could possibly play.”