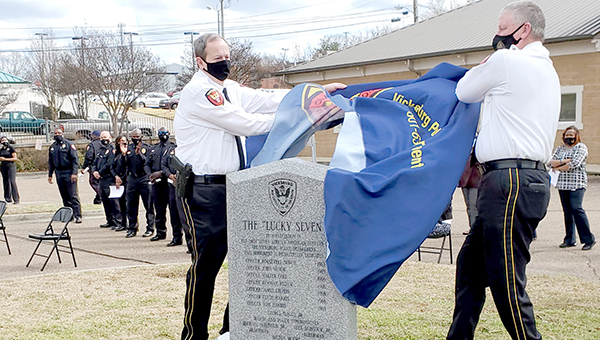 They were seven African American men who paved the way for others to follow.

Known as the “Lucky Seven,” Roosevelt Bunch, James “Boo” Chiplin, Walter Cole, Clyde Harris, Tom Harris, Joe Minor and Herman Reddick were the city of Vicksburg’s first African-American police officers who were hired in the early 1960s when segregation was the rule in the Deep South and they set the bar for the and women who followed them.

“This is a historic day,” said Vicksburg Police Chief Milton Moore, whose father was a Vicksburg police officer. “It is indeed a privilege and an honor to dedicate a monument to honor seven great officers known as the ‘Lucky Seven.’ These officers are the shoulders on that we stand on.

“These officers truly exemplified bravery in the face of adversity,” he said, pointing out the officers did foot patrol working in the city’s poorest neighborhoods. They could not arrest whites or give whites a ticket.

“Their authority was limited to only arresting blacks,” Moore said. “These officers sacrificed a lot while still being dedicated, committed and passionate about their profession. They all served with dignity and grace, all while making approximately $300 a month.

“Due to all the struggles they had to endure and overcome has allowed me to stand before you today as your police chief, which is humbling and amazing. To show how much we appreciate their sacrifices, we have to carry the torch and continue to lead by example. With this monument, their legacy will live on. They did it well. To the Lucky Seven … I am indebted to you guys,” Moore said.

“I thank God for this opportunity to be here on this day at this time in Vicksburg,” Chiplin, the only remaining member of the Lucky Seven, said as he gave a history of the officers’ service.

“I will never forget what that meant to my life and it was an honor to serve with them and I am grateful that you honor us all now,” he said. “Thank you to the Vicksburg Police Department for giving the brotherhood, the Lucky Seven, a place in history; black history; Vicksburg history.”

North Ward Alderman Michael Mayfield said young people need to learn the history of the Lucky Seven, adding, “These guys endured some things that you and I may never know about.

“They did it because they had families to take care of and they did everything right for us at that given time,” he said. “What they did shows out here right now.”

Retired Brig. Gen. Robert Crear called the men the “Magnificent Seven because of their legacy in Vicksburg, Mississippi.”

Crear challenged the people attending the ceremony to carry on the courage and legacy developed by the example of the Lucky Seven pointing out that their legacy was demonstrated in the administration of the department through Moore and Deputy Chiefs Eric Paymon and Penny Jones.

Mayor George Flaggs said the story of the Lucky Seven needed to be told.

“These seven blessed men took the hit for us,” he said. “In order to patrol these streets you had to be bold. This is the day when we honor what police really are. They are to protect and serve with honor, with dignity and with pride.”

“It’s such an honor being the child of someone who made changes in a city like this,” said Chiplin’s daughter Lutha Chiplin Hunt, who came with her family from Natchez for the ceremony. “To see the changes that have been made and to know my father’s been a part of that change is the legacy I want to pass on to my children and my children’s children.”