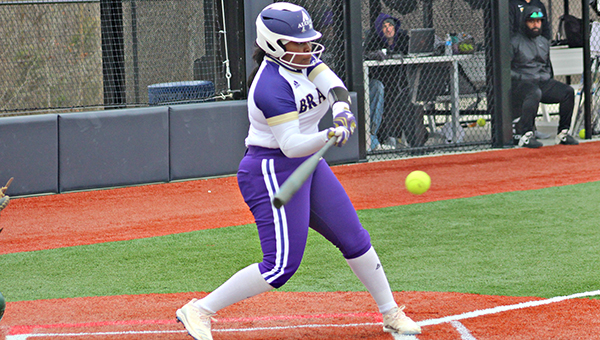 Alcorn State softball player Kelsey Lockridge, a former Warren Central star, swings at a pitch Thursday against Kentucky State. Lockridge went 3-for-6 with two triples, four RBIs and four runs scored as the Lady Braves swept the Thorobreds in a doubleheader, 14-1 and 14-4.

College softball is coming to Vicksburg this weekend.

The teams playing in the River City Classic are Alcorn State, Jackson State, Tuskegee, Tennessee State, Grambling, Spring Hill and Miles College. This is the second year for the tournament, but the fourth year in a row that Alcorn has scheduled games in Vicksburg.

Alcorn State will play a split doubleheader Friday, with a game against Tennessee State at noon and Tuskegee at 2:15 p.m.

In addition to the River City Classic, Delta State announced that it is moving its weekend series against West Georgia to Sports Force Parks.

Delta State and West Georgia will play the first two games of their Gulf South Conference series as a doubleheader beginning Friday at 2 p.m. The series will conclude with a single game Saturday at noon.