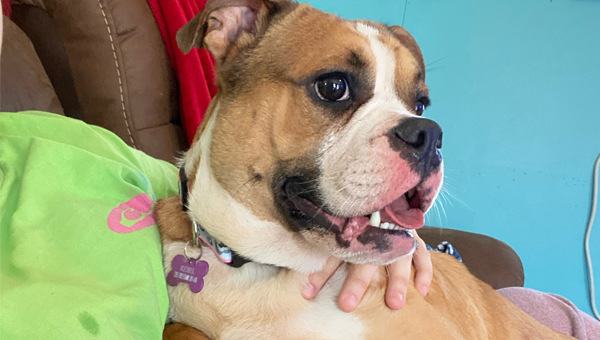 Word was spreading on Facebook about a dog seen roaming around during last week’s ice storm.

At first, it was assumed she belonged to someone.

“I thought maybe the owners knew she was out,” Amber Jones said.

That was not the case.

Ashley Jilbert wound up finding the English Bulldog Boxer mix stuck in a ravine near Beechwood Road near Highway 61 North. Jilbert was unable to keep the dog at her home, so she reached out to others to see if they could take the stray dog in.

“I asked my husband if we could take her,” Jones said. “I didn’t want to see her go to a shelter.”

Jones said her husband said yes and, through Facebook posts, was able to raise $500, which allowed her to take the dog to the veterinarian.

“Her feet were all cut up and she had mild frostbite,” Jones said, but other than that, Rebel, as Jones called her, was in good shape.

“I named her Rebel because she had rebelled against all odds,” Jones said.

The Joneses were not destined to be Rebel’s forever home, however. Jones said Rebel was a “really sweet dog,” but did not get along very well with the family’s “weenie” dog and so they were unable to keep her.

“I wanted so bad to keep her,” Jones said. “I had fallen in love with her.”

Billy and Lauren Young, friends of Jones, decided they wanted Rebel. On Tuesday, they picked her up and took her new home.

Jones also said the remaining donated money would go to having Rebel spayed.