Gators bow out of playoffs with loss to Holmes County Central 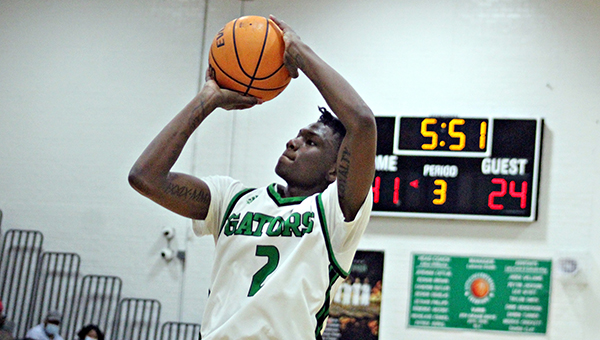 Vicksburg’s Keshawn Brown shoots a 3-pointer during an MHSAA Class 5A playoff game against Saltillo earlier this week. Vicksburg was eliminated from the playoffs with a 74-64 loss to Holmes County Central on Thursday. (Ernest Bowker/The Vicksburg Post)

Another good season for the Vicksburg Gators ended far, far sooner than they wanted it to.

Holmes County Central opened the second half with a big run to get the lead and never gave it back, beating Vicksburg 74-64 on Thursday in the second round of the MHSAA Class 5A boys’ basketball state tournament.

Vicksburg (15-8) finished with 15 wins or more for the third season in a row, but also lost in the second round of the playoffs for the second consecutive year. It has not been past the second round since reaching the Class 5A championship game in 2014.

“Awesome season. I’m looking forward to our seniors signing soon. It’s so hard to get to the ‘ship, but we put up a fight,” Vicksburg coach Kelvin Carter said. “It’s super hard to go on the road in a hostile environment and win. Now we turn our focus to graduating and being the student-athletes they are.”

The loss, Carter said, was made even tougher by it being the end of an era of sorts. Eight seniors, including starters Sean Hardy, Taylon Smith, Jaden Williams and Keshawn Brown, are graduating from this year’s team.

Brown scored a team-high 17 points against Holmes County Central, Smith had 12, Hardy 11 and Williams four. Another senior, Anthony Lumpkin finished with 11 points off the bench.

“It’s very tough because they were not only seniors but a good group of young men that cared about each other,” Carter said.

The Gators breezed past Saltillo in the first round of the playoffs, and had beaten Holmes County Central earlier this season, but ran into a wall in the second half Thursday night.

Holmes opened the third quarter on a 9-0 run to erase a six-point deficit and then stayed a step ahead of the Gators the rest of the way. Depth and some key rebounding of missed free throws down the stretch allowed the Jaguars to close out the game.

Amarrion Hogan led Holmes with 19 points, Louzavious Thomas scored 16, and Quashon Rowe and Malik Crigler finished with 12 apiece. The Jaguars went 10-for-17 at the free throw line in the fourth quarter.

“They made a few key 3s which allowed them to snatch the momentum. The game was actually closer than (10 points), but under a minute we had to start playing the foul game. They missed, but rebounded their misses,” Carter said. “He played about 12 guys and they just wore us down. I played eight, but it wasn’t enough. The full court pressure all game long was relentless.”