City to borrow money to fix damage from 2020 rains 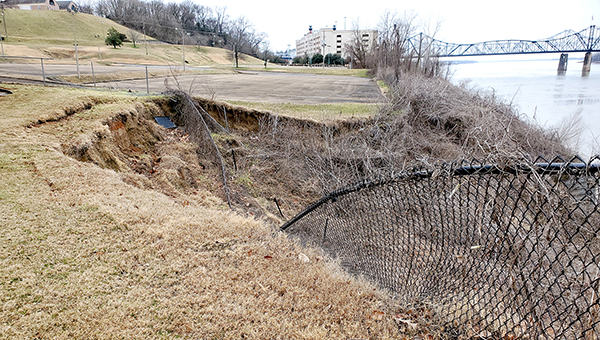 A section of the riverbank, including the fence and walking trail, collapsed toward the Mississippi River at Riverfront Park on Feb. 26, 2021. The damage, which occurred during heavy rains in 2020, is one of the reasons the park has been closed. City officials are seeking federal emergency funds to repair damage at the park. (John Surratt/The Vicksburg Post)

City officials anticipate getting a short-term loan of up to $4 million to cover the cost of repairing erosion damage to city streets and Riverfront Park caused by heavy rains in January and April 2020.

The loan announcement came as grants coordinator Nancy Allen presented a timeline on the city’s application process for emergency funds at a meeting of the Board of Mayor and Aldermen meeting Thursday.

The city has applied for Federal Emergency Management Agency emergency funds to make the repairs. The grants will cover 75 percent of the eligible costs of each of the seven repair projects.

The grants are reimbursement grants, meaning the city will pay for the repairs and be reimbursed for the costs.

“We have to front the cost of the projects and then submit the paperwork to FEMA and they will reimburse 75 percent of all the eligible costs,” Allen said. She said the Mississippi Emergency Management Agency is expected to pay one-half, or 12.5 percent, of the city’s 25 percent match. Warren County will pay a portion of the cost to repair Riverfront Park.

Allen said a preliminary estimate for the work is $2.5 million, “But we won’t know the full cost until the engineers complete the design work for the projects.”

She said three engineering firms, Stantec, Neel-Schaffer and Waggoner Engineering/AJA Management have been hired to do the engineering and design work for the projects.

All three have submitted their contracts to the city’s legal department. Once they are approved by the city the contracts must be approved by FEMA, Allen said. Once FEMA approves the contracts, the companies can begin working on the projects.

Allen said the city applied for assistance on April 30, 2020, soon after a presidential declaration was issued concerning the damage from the January and April rains. The city’s first meeting with a FEMA representative was May 18.

“All the FEMA and MEMA representatives have been great, and there have been a bunch of them,” Allen said. “They kept changing on us so they had to relearn our projects. It’s also taken longer because of COVID and site visits had to be virtual.”

She said the FEMA representatives had to write an estimate of the cost to return the site to its pre-storm condition. The estimate, Allen said was reviewed by the city’s disaster assistance consultant. “If they agree, the project moved forward,” she said.

“That’s why Riverfront Park has not been open,” Mayor George Flaggs Jr. said, referring to Allen’s report, adding the grant process has caused a delay in erosion repairs to James E. Sturgis Sr.  Street. “It’s not because the board hasn’t done anything,” he said.