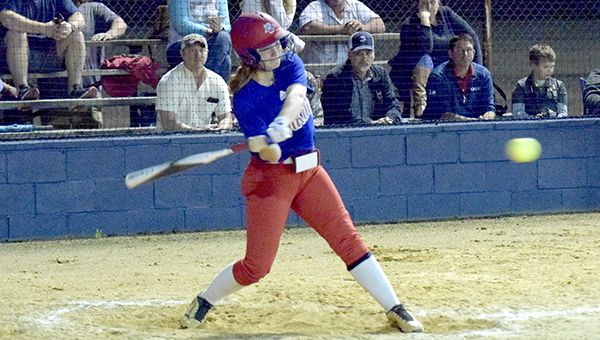 MEADVILLE — Early this season, Warren Central softball coach Dana McGivney said she plans to experiment with different lineups and player combinations to find the right one.

She might want to bookmark the one she used Thursday.

The Lady Vikes scored in each of the first three innings, racked up 10 hits, and two pitchers combined to allow one hit as they routed Franklin County 12-0.

“We hit the ball better tonight. I thought we looked pretty good tonight. We did what we needed to do,” McGivney said. “It’s going to take several games because you want to get people several at-bats. You’ve got to try to figure out what works best. Maybe one will hit one day and one hits the next day, and that’s a good problem to have. It also gives you the flexibility of, if you’re in the middle of a game and somebody’s not doing well, you can get somebody in with the confidence that you’re not going to drop off.”

Warren Central pitchers Annalyn Nevels and Mary Evelyn Hossley combined on a one-hit shutout. Nevels pitched three innings and allowed only a first-inning single to Sadye Scott. She walked one batter and struck out three.

Hossley pitched the last two innings and walked two batters, but did not allow a hit while striking out three.

Warren Central will return to action Friday with a doubleheader against Florence beginning at 3:30 p.m. at Sports Force Parks in Vicksburg.

Gators bow out of playoffs with loss to Holmes…