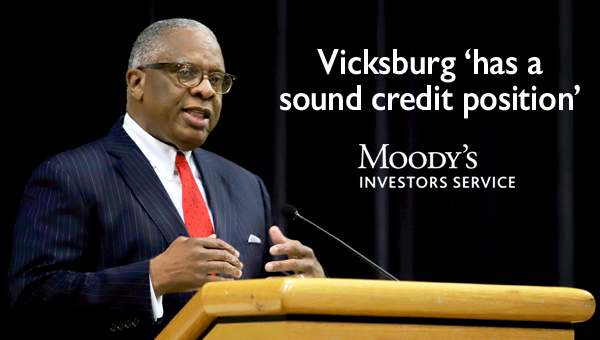 The City of Vicksburg has received confirmation of an A2 rating from Moody’s Investor Service for the seventh consecutive year.

In Moody’s analysis of the city’s finances, it noted the city “has a sound credit position” and “the financial position of Vicksburg is a strength relative to the assigned rating of A2.”

Moody’s also noted the current administration’s management policies are commendable as a result of its asset management and planning policies that help support capital infrastructure projects.

“Moody’s has confirmed for seven consecutive years that Vicksburg and its finances are moving in the right direction,” Flaggs said. “Since becoming mayor, I’ve not only restored the city’s credit rating but have also done everything in my ability to be fiscally responsible with the tax dollars entrusted to me. I’m proud of this accomplishment and will continue to build on the City’s creditworthiness in any way possible.”

Moody’s considered the city’s regular review of rates and budget performance, the maintenance of long-term capital and financial planning and audits based on generally accepted accounting principles when making their A2 determination.

Moody’s ranks the creditworthiness of borrowers using a standardized ratings scale that looks at fund balances and reserves regarding fiscal management and provides financial research on bonds issued by commercial and government entities throughout the world.