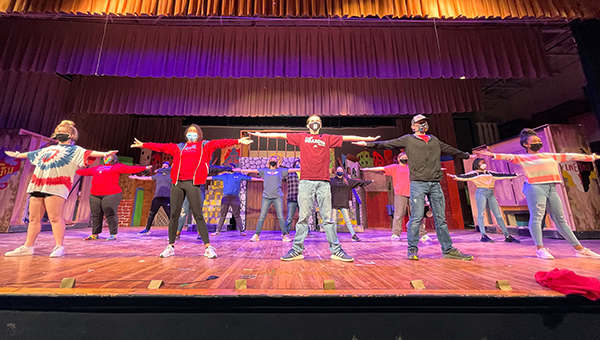 The cast of Warren Central’s Descendants dances to the final song “Break This Down.”

They say the apple doesn’t fall too far from the tree when it comes to children following in their parents’ footsteps.

But what if your mother or father has some pretty significant character flaws and is just downright evil.

Is there a chance of breaking the cycle and changing for the better?

Based on the Disney Channel Original Movies of the same name, “Descendants” puts a spin on some of its classic characters, WCHS head choir director Eric Johnson said.

“It tells the story of the children of four of the most infamous Disney villains — Jafar, Evil Queen, Cruella de Vil and Maleficent,” he said, who are given the opportunity to leave the magic-free island where their wicked parents live and go to Auradon, home of all the Disney heroes.

There, the children are taught how to become good.

Johnson said he has a total of 54 students – 35 cast members, 13 set crew members, two lighting crew members and four sound crew members that are participating in the WCHS stage production.

Prince Ben, the son of King Beast and Queen Belle is played by Ryan Doyle.

Serving as choreographers for the musical are Sam Lovorn and Beth Fortner.

“The choreography is energetic, highly involved, and multi-staged and they (Lovorn and Fortner) have done an amazing job with keeping the spirit of the show, while putting our own Warren Central spin on the dance numbers,” Johnson said.

Also, Johnson said, costumes, hair and makeup for the production are bright and vivid.

“Just like our set, which is the largest and most complex set we’ve constructed in the seven years that I’ve been at WCHS,” he said.

Rehearsals for “Descendants” started at the end of November and have been held four days a week. Johnson said two more days of the week were set aside for building sets.

“By the time we finish the production, we will have totaled around 150 hours of rehearsal time and about 80 hours of set construction,” Johnson said.

In years past, the WCHS musicals have had a live orchestra, but this year professionally recorded tracks provided by the licensing company will be used since the production did not offer that as an option.

Understandably, the pandemic has been one of the most challenging aspects in preparing for the production, Johnson said.

“It took so much more planning on the part of the directors and administrators,” he said. “We were sure to follow all of the current state and federal guidelines and research. Cast and crew were required to wear masks and have temperatures taken at every rehearsal. We broke the cast down into small groups for rehearsals so that we could practice social distancing.”

“Because of the pandemic, we are limited to only 200 patrons per show,” Johnson said, and currently the March 6th show is sold out.

Tickets for the remaining shows are available online at our.show/wchsdescendants, and the cost is $10 or $5 for ages younger than 10.

Tickets will not be sold at the door, Johnson said.

This year WCHS will be streaming the production beginning at 7 p.m. Friday, April 2 and Saturday, April 3.

Tickets for the stream are $10 and may be purchased at https://www.showtix4u.com/event-details/45908.