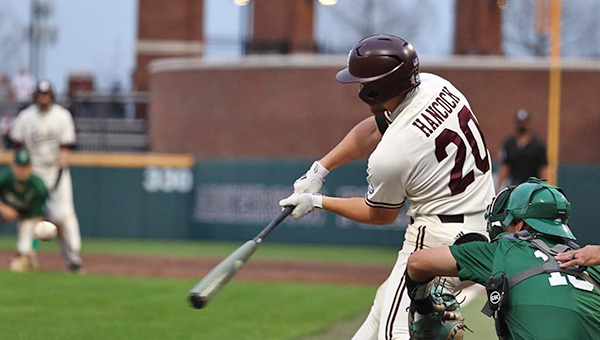 STARKVILLE — Growing up 40 miles from Dudy Noble Field, sophomore Luke Hancock is well aware that The Dude is a special place. On Saturday he left his mark on its storied history.

Hancock hit a walk-off grand slam that gave No. 5 Mississippi State a 9-5 win over Tulane to even their weekend series at a game apiece.

“If you can get that atmosphere going in the ballpark here, it makes it really hard to pitch,” Mississippi State coach Chris Lemonis said. “Luke took advantage of it at the end. I’m really happy for our guys. They fought all day long. They never put their heads down, they just kept competing. We had a couple disappointing innings, but you just have to keep playing the game and I thought our guys did that.”

Hancock’s homer was the last of three the Bulldogs hit on Saturday. Tanner Allen hit one in the first inning, and second-year freshman Kamren James led off the sixth inning with his second home run of the year.

Second-year freshman pitcher Landon Sims again came up big in relief for MSU. He entered the game with a runner on first and one out and struck out the final two batters to end the third inning, and went on to strike out 10 batters in 3 2/3 innings of work.

It was Sims’ second straight outing with double-digit strikeouts.

“Right now, he’s our best guy at just attacking the zone, attacking the hitters, and going after it,” Lemonis said. “I love the pace he pitches with, and obviously the stuff is great, but you have to hit him to score and be able to do (productive things).”

Throwing a scoreless ninth inning, Stone Simmons (1-0) picked up his first win for MSU after transferring from Furman. He worked around a one-out single, as all three of his outs came on the ground.

For Tulane, Chase Engelhard was 2-for-3 with a double and home run. He added a hit-by-pitch, scored twice and drove in two runs.

Mississippi State and Tulane will finish their three-game series Sunday at noon.

The Rebels scored three runs in the bottom of the ninth to avoid a second consecutive loss at the hands of UCF.

Trey LaFleur started the winning rally with a leadoff home run. Calvin Harris then hit a one-out, pinch-hit double and scored on a single by Justin Bench to tie it at 5. Bench moved to third on an error, and Elko brought him home with his game-winner down the right field line.

In the second game, Ben McCabe went 3-for-4 with a double, home run, two RBIs and four runs scored to lead Central Florida to a 7-2 victory. UCF took two out of three games in the series from the Rebels, who earlier in the week attained the first No. 1 national ranking in the program’s history.

McCabe also hit a three-run home run in game one.

Sargent’s first home run in the third erased a 3-0 deficit with a three-run shot. His second blast, a two-run shot in the seventh inning, proved to be the difference in the one-run contest.

Five of Southern Miss’ eight hits went for extra bases. Michael Wein hit an RBI double in the fourth inning to bring in the go-ahead run, and later scored on an error to put USM ahead 5-3.

Aubrey Gillentine, the second of six Southern Miss pitchers, earned the victory. He allowed one hit and struck out three in three scoreless innings.

Garrett Ramsey pitched the last 1 2/3 innings without allowing a baserunner to earn his second save of the season.

Southern Miss (4-2) and UConn (1-4) will complete their three-game series Sunday at 11 a.m. at Pete Taylor Park in Hattiesburg.

Hinds was not able to follow up its big win in the second game of the doubleheader.

Alex Frillman and Darion Duhon both went 2-for-4 with two RBIs and two runs scored as Holmes won 8-6 to salvage the split.