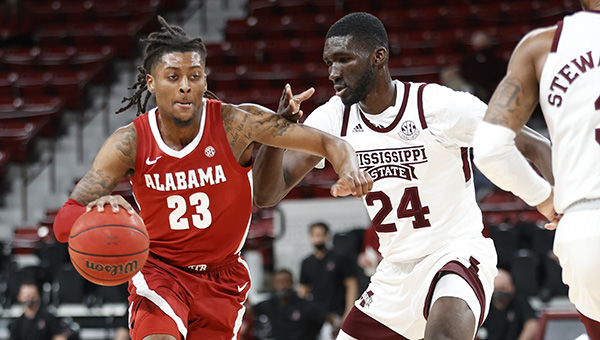 STARKVILLE (AP) — Jaden Shackleford scored 10 of his 15 points in the second half, and No. 6 Alabama beat Mississippi State 64-59 on Saturday night to clinch its first Southeastern Conference regular-season championship since 2002.

The Crimson Tide (19-6, 14-2 SEC) led by double digits for much of the game before the Bulldogs (13-12, 7-9) closed to 56-53 on Iverson Molinar’s layup with 4:17 left. Mississippi State had a chance to draw even closer over the next three minutes, but Alabama came up with a couple of big stops and James Rojas drained a 3 from the right corner to make it 59-53 with 43 seconds left.

D.J. Stewart Jr. made four free throws for MSU in the final minute, but Alabama went 5-for-6 at the line down the stretch, including two successful attempts by John Petty Jr. with 11.9 left.

Jahvon Quinerly had 19 points for Alabama, including 15 before halftime that helped the Tide snap out of a cold shooting start. Herbert Jones grabbed 14 rebounds as Alabama enjoyed a 45-40 rebounding advantage.

Stewart scored 15 points for the Bulldogs, who had won their past two games. Deivon Smith had 12 points and 13 rebounds, and Molinar scored 11 points.

Vanderbilt (7-13, 3-11 Southeastern Conference) was without its top two leading scorers in Scotty Pippen Jr. and Dylan Disu, who combine for 35.5 points per game. Despite that, The Commodores’ bench outscored Ole Miss 39-4 to help avoid losing another close SEC game.

Pippen missed his second straight game after starting his previous 32 and Disu, the SEC’s leading rebounder at 9.2 per game, had knee surgery Friday to end his season.

Issac McBride gave the Commodores a 10-point lead with 1:51 left before Ole Miss answered with an 8-0 run, capped by Devontae Shuler’s 3-pointer. Brown went 1-of-2 on the following possession for a 73-70 lead, but Ole Miss couldn’t take advantage. It missed two 3-pointers before Brown capped it at the line.

McBride and Maxwell Evans each added 13 points for Vanderbilt. Jordan Wright had 12 points and five assists, and D.J. Harvey scored 10. Vandy closed the first half on an 11-3 run for a 34-32 lead.

The Owls (10-9, 5-5) completed the season sweep against the Golden Eagles. They also defeated Southern Miss 69-60 on Friday.

The St. Aloysius Flashes bounced back nicely from their first loss of the season. Conner Paxton went 3-for-3 with four... read more