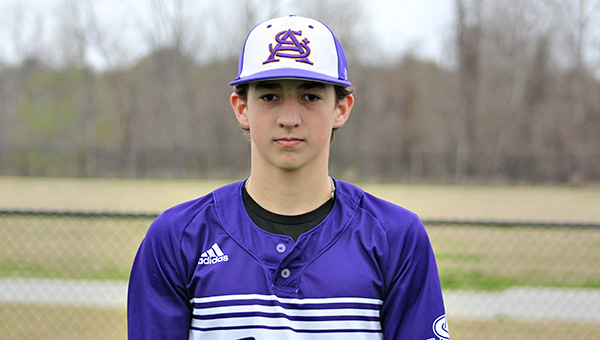 St. Aloysius baseball player Conner Paxton went 3-for-3 with four RBIs, and also pitched 1 1/3 innings in a 13-1 win over Franklinton (La.) on Saturday.

The St. Aloysius Flashes bounced back nicely from their first loss of the season.

Conner Paxton went 3-for-3 with four RBIs, and Ben Raines had two hits and scored three runs as the Flashes pounded Franklinton (La.) 13-1 on Saturday at the Riverfield Classic in Sterlington, La.

In their second game of the day, St. Al beat Riverfield Academy 8-3, to complete the split doubleheader sweep a day after they were shut out by MAIS power Magnolia Heights.

In both games the Flashes used fast starts to get ahead of their opponents.

Carson Smith pitched 2 2/3 innings of scoreless relief. He allowed one hit and one walk, and struck out one.

Against Riverfield, St. Al (3-1) scored seven runs in the top of the first inning — two of them coming across on a base hit by Raines — and then maintained the lead the rest of the way. The game was shortened to four innings by a tournament time limit.

Cole Autrey went 2-for-2 with an RBI and a run scored, while Riverfield’s Bailyn Sorensen was 1-for-2 with a triple, two RBIs and one run scored.

The star of the game was St. Al’s Tristan Wilbanks, who powered the Flashes to victory on the mound and at the plate.

Wilbanks had two hits, including a double, drove in one run and scored another. He was also the winning pitcher, and struck out eight batters in four innings of work.

St. Al is scheduled to host Ethel Monday at 6 p.m. at Bazinsky Field, and then return the trip next Thursday at 6 p.m. The Flashes will also host Washington School on Tuesday and play at East Rankin Academy next Saturday.

Todd Etheridge went 2-for-3 with an RBI and two runs scored, while Marsh Wood had two singles and three RBIs for the Trojans.

Wood also pitched two innings and allowed one hit and one run while striking out two.

Dee Morgan went 2-for-2 with one RBI and two runs scored, and Kayne Romero scored two runs for Tallulah.

Paul Michael Machen went 3-for-3 with two doubles, three RBIs and two runs scored for the Trojans. He also had five strikeouts in two innings of scoreless relief work on the mound.

Warren Central is still looking for its first win of the season, but found a silver lining Saturday by pulling... read more