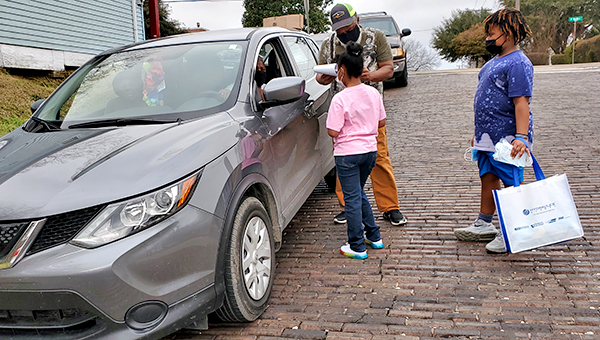 Jackson Street M.B. Church member Maurice Davis checks the registration of a resident waiting to receive a food box from the church. The church distributes food from the Mississippi Food Network on the last Saturday of each month. (John Surratt/The Vicksburg Post)

For the past four years, on the fourth Saturday of the month, the church’s congregation has distributed boxes of food to residents who contacted the church in advance for help. They then go to the church to pick it up.

Saturday morning before 7 a.m., cars lined Jackson Street from its intersection with Second North Street west to First North Street, and then east on Grove Street to get food boxes.

“We notify people when we’re going to do it and they sign up for it,” church member Fred D. Davis said. “We usually serve 275 to 300 people. Sometimes we have special distributions when we get extra items like milk that has to be distributed quickly.”

Davis said the church gets the food from the Mississippi Food Network in Jackson. He said the men of the church pickmup the food, the women pack the boxes and the men distribute the food.

“We even have the children helping out,” Davis said.

Davis and another church member, Maurice Davis, walked from car to car to verify that each person was registered.

“Usually the people came into the church to register, but we had to change with COVID,” Fred D. Davis said.

Alean Luster, who came for a food box with her friend, Katie Robinson, was grateful for the food.

“This is a blessing,” Luster said. “I want to thank Jackson Street M.B. Church and their pastor (the Rev. Trollers Moore). They give us nice food and we appreciate it. Everyone gets involved.”