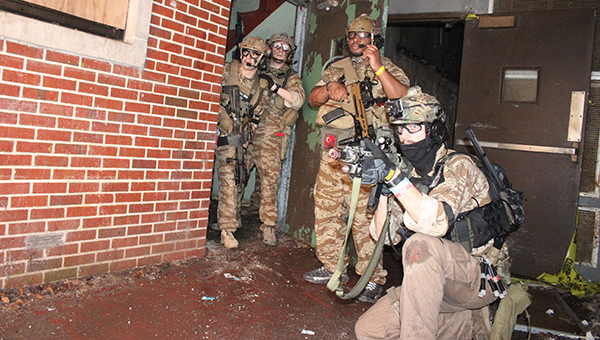 A member of the Western Empire looks for members of the opposing force as his comrades prepare to cross open ground during “Operation Bone Strike V” — a simulated military exercise using Airsoft weapons — at the old Mercy Hospital building. (John Surratt/The Vicksburg Post)

For two days this weekend, the old Mercy Hospital on Hildegard Terrace became a battleground.

Friday and Saturday, the parking lot of the nearby Street Clinic was populated by men and women dressed in tan or green military uniforms carrying simulated weapons that closely resembled actual military hardware and spending time under tents erected over the asphalt.

Third Coast Airsoft, a Norcross, Ga.-based company that offers people the opportunity to participate in military-type experiences, was using the Mercy Hospital building for one of its events. The tan-clad members of Western Empire competed against the Eastern Empire members dressed in green, in an event known as “Operation Bone Strike V.”

“A few years ago, TCA was created to provide the Airsoft community with a military simulation experience,” said TCA representative Chris “Snicks” Snickle. “Airsoft was born from the paintball experience. People wanted more replicas (weapons); more of a military situation.”

Instead of shooting a ball filled with paint, Snickle said, Airsoft weapons fire small, soft, biodegradable BBs. Airsoft weapons are replicas of real military weapons like the M-16, M-4 and AK-47, among others.

“There’s a lot of the camo and the gun magazines are close to replicas,” he said. “So people go to Airsoft to get a more realistic experience.”

Snickle said the activities conducted by TCA are objective-based. The opposing forces have certain objectives to meet during the simulation, like finding a water source or ammunition supply.

When the objective is reached, the team finding it locates an electronic monitor that is turned on and counts the length of time the team holds on to the objective. Every second they hold it they score a point.

“We also have indirect missions,” Snickle said. “Sometimes in the middle of a fight they might get a radio call for another mission. Not everyone who participates in this has been in the military so we try to keep it simple and try to give them the experience.”

TCA partner Sam Asadi said the generals for both teams are the same for each experience.

“That way, they get to know their strong members and their weak members,” he said.

The 350 participants in “Operation Bone Strike V” came from several states, including Texas, Florida and Pennsylvania, and were a mix of civilians looking for the military experience and former military members. About 75 percent of the participants were civilians.

Snickle, an Iraq War veteran, and Asadi said the events produced by TCA have helped veterans get used to returning to civilian life.

“We emerge our military veterans into the program by putting them into leadership roles,” Snickle said. “We try to put the veterans into leadership and teaching roles so they get back into the mindset of no consequences, where they can come out here, have a good time doing what they used to do — doing what they love and having that camaraderie that we had when we deployed.”

The environment allows veterans, including those with post-traumatic stress syndrome, to get back to where they are more comfortable.

“This is not a cure for PTSD, because it is not curable,” Snickle said. “It’s the immersion aspect of getting them back into the military life that they’re used to, that they’re comfortable with.

He said law enforcement officers get involved because the situations they face during the military simulations are real-world situations.

“This can really happen; it’s fantastic,” he said. “Police get to come out here with weapon systems they’re really using every day. It also gives them the opportunity to put their training to use.”

The cost to participate in the weekend’s exercise was $120 per person. Snickle said the cost of each experience varies depending on the cost of the venue, or area of operation.

The one thing the participants in “Operation Bone Strike V” were unable to do was to use simulated explosives which were banned out of concern for surrounding residents.

Snickle called the Mercy Hospital building fantastic. He said unique areas of operations like Mercy are what drives the military simulation industry.

“The industry now is looking for unique places to play and this happens to be one of those unique places,” he said. “Real-world experience is what we try to provide to the players.

“Rather than go out to a field that’s set up to do this and 20-30 acres and plywood bunkers, this gives the player an actual immersion. This is the real world. We get to come out and play in an abandoned hospital.”