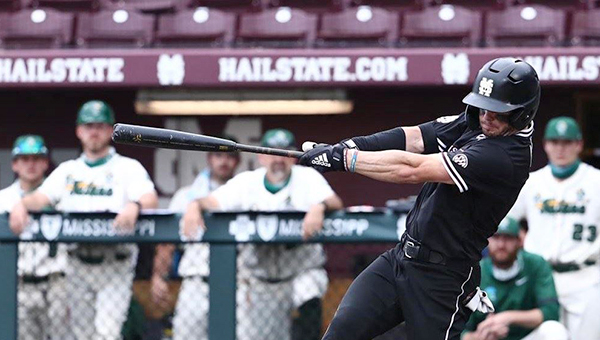 STARKVILLE — Tanner Allen capped off a weekend of baseball drama at Dudy Noble Field the only way it could end.

Allen delivered a two-run single in the bottom of the ninth inning Sunday to give No. 5 Mississippi State its second consecutive walk-off win over Tulane, 5-4.

Sunday’s win followed a 9-5 victory the day before in which the Bulldogs scored six runs in the bottom of the ninth, capped by Luke Hancock’s game-winning grand slam.

It is the 16th time in Allen’s career that he has delivered the game-winning run, with two of those walk-off winners.

“We knew coming into the weekend that they had three really good starting pitchers and that if we could get into their bullpen a little bit we could have a chance to win,” Mississippi State coach Chris Lemonis said. “We got pitch counts up early in games, but you would still like to have some better at-bats, especially with runners in scoring position. We are able to compete late.”

Mississippi State (5-2) entered the ninth inning with a 3-2 lead, but Tulane went ahead with a two-run home run by Luis Aviles in the top half.

Keagan Gillies — the last of seven pitchers used by Tulane — quickly got the first out in the bottom of the ninth before Mississippi State started its game-winning rally.

Two walks and a wild pitch were sandwiched around a line out by Rowdey Jordan to put runners at second and third. Then, with two outs and a full count, Allen lined a base hit to left center field. Drew McGowan and Scotty Dubrule, who were running on the pitch, both scored easily for the 5-4 win.

It was Allen’s only hit of the game. He had struck out three times in his first four at-bats.

Tulane (3-4) had won the first game of the series and was a few pitches away from sweeping a top-five opponent on the road. Instead, it lost two out of three and left Starkville with a losing record for the season.

“We came here with the intent to win and we had the lead in the ninth inning in all three games,” Tulane coach Travis Jewett said. “To come out of here with just one of those games is pretty disappointing, there’s no doubt about it. We need to figure out how to finalize these type of games.”

Kamren James hit a two-run home run for the Bulldogs, and Hancock hit an RBI double.

All of Tulane’s runs came on home runs — the two-run shot by Aviles in the top of the ninth, and solo shots by Chase Engelhard and Frankie Niemann in the second and fourth innings, respectively.

Spencer Price (1-0) allowed Aviles’ homer in his one inning of work, but wound up going from losing pitcher to winner thanks to Allen’s heroics.

Mississippi State will take a short road trip to Pearl on Tuesday to play Southern Miss at Trustmark Park. The game begins at 6 p.m. After that, the Bulldogs will host a weekend series vs. Tennessee Tech beginning Friday.

HATTIESBURG — Southern Miss, it seems, used up all of its late-inning magic in the first two games of its... read more