Missy Gators have plenty of optimism after playoff loss 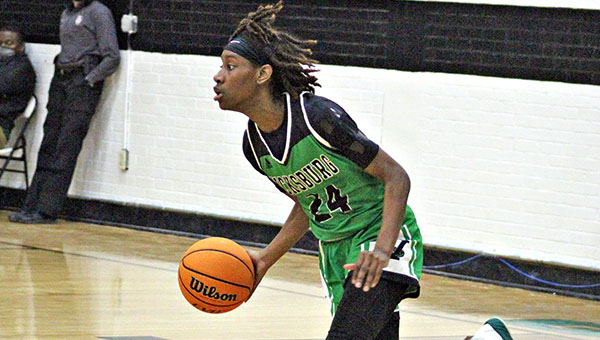 When they walked off the court for the final time last week, the Vicksburg Missy Gators had a swirl of emotions swimming around inside of them.

There was, understandably, some disappointment. They’d gone 16-7 and were ranked in the top five among MHSAA Class 5A girls’ basketball teams, but their season ended with a 73-66 second-round loss to Neshoba Central. Sixteen missed free throws added a tinge of frustration that a winnable game had slipped through their fingers.

Meanwhile, amidst all of the negatives were plenty of positives.

The Missy Gators won the Region 4-5A championship for the second year in a row, and established the program as a player on the state stage. And, most importantly, there was a determination that this was nowhere close to the end of the run.

Vicksburg will only lose two seniors from this year’s roster — starting guard Sha’Kora Knight and reserve guard Britney Dent. With the bulk of the team returning, there was as much optimism for the future as there was dejection in the present.

“We have pretty much the same team as this year. We’ve got to step up and work in the offseason,” said sophomore guard Destini Sims. “It was actually a great year. Coming from last year, making it to the semifinals, it’s kind of sad we couldn’t get that far but I know me and my team played our best.”

What the Missy Gators have accomplished the past two seasons, and how far the program has come in a short time under coach Troy Stewart, was not lost on them, either.

Vicksburg’s girls’ team went seven seasons without a winning record, bottoming out with a 4-21 mark in 2016-17. Stewart took over the following year and has yet to have a losing season. Vicksburg has a 69-45 record during his tenure, and it has reached at least the second round of the playoffs all four years.

The 2019-20 team got to the Class 5A semifinals. This year’s squad replaced four starters and cruised to the Region 4-5A championship — all seven of its victories against region opponents were by double digits — before running into an equally-talented Neshoba Central team.

Neshoba Central (22-5) went on to beat Cleveland Central 52-48 in the third round of the Class 5A state tournament, but lost 65-52 to Laurel in the semifinals on Tuesday.

“I think we’re playing as good of basketball as we did last year and it’s a whole set of sophomores and young kids. I can’t say it too many times — I’m extremely proud of them,” Stewart said after the playoff loss.

The Missy Gators’ youth was the biggest factor in easing the sting of an early playoff exit. Six sophomores, including leading scorer Layla Carter (11.9 points per game) and guards Ja’Na Colenburg (7.5 ppg) and Janiah Caples (5.9 ppg) ably stepped into bigger roles after being complementary players during the 2020 playoff run. Sims, the 2020 Vicksburg Post Player of the Year, also had another solid season and will be back.
Those players will all be seasoned veterans going into next season.

“We’ll be back,” Stewart said. “Everybody’s coming back, save (Knight). We’re a young team. I hope we learn from it and go move on from there.”

With the success they’ve had, however, does come raised expectations. Stewart did not shy away from those.

“Anything less than the second round of the playoffs is a disappointment next year,” he said. “This year, on the other hand, I think we’ve exceeded expectations. Losing all those players, and this group of ladies stepped up and played as well as we could possibly play. I’m proud of each and every one of them, and my (assistant) coaches as well. I think we’re impressive, and I’m looking forward to next year.”