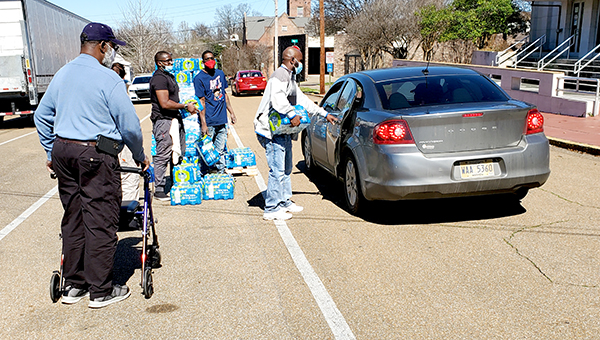 Cases of water were stacked in the parking area in front of the Vicksburg Auditorium and the members of New Beginning Church in Christ were waiting as the cars began pulling up about noon Wednesday.

The church was giving away cases of water to anyone who showed up. By the time they finished late Wednesday afternoon, church members had given away 850 cases.

“We were supposed to start giving them away at 1 o’clock,” pastor James Bowman Sr. said as the cars began pulling up to the distribution point just after noon. “We got 11 pallets of water and we’ve already given away one pallet; we have 10 to go.”

The cars came to the auditorium piecemeal — one at a time, two at a time. Sometimes church members served a line of four or five. Some got one case of water and some got two. One man came on foot.

Bowman said the water came from the Mississippi Food Network in Jackson.

“We have a food pantry at the church,” he said. “The Mississippi Food network provides the food and they gave us the water to pass out to the city of Vicksburg. We have food distribution every fourth Friday at the church at 100 Fisher Ferry Road. This is the first time we ever gave water.”

Will the church continue giving out water in the future?

“We’ll have to wait and see,” Bowman said.