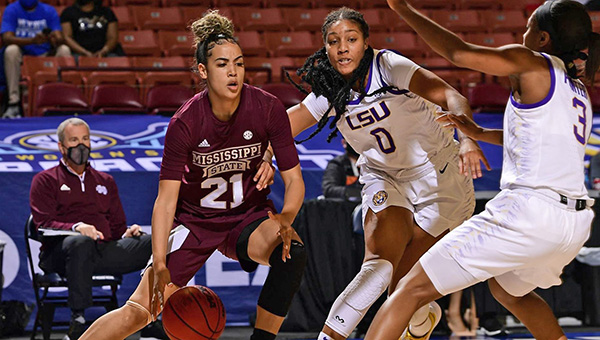 GREENVILLE, S.C. (AP) — For the first time in five years, Mississippi State will not be playing on Championship Sunday at the Southeastern Conference women’s basketball tournament.

This time, they won’t even be playing on Friday.

Ryann Payne scored 17 points off the bench and eighth-seeded LSU ended a five-game losing streak with a 71-62 win over ninth-seeded Mississippi State on Thursday in the quarterfinals of the SEC Tournament.

“We wanted to take the mistakes that we made in our previous game and make sure it didn’t happen again,” LSU coach Nikki Fargas said of handling Mississippi State. “We talked about being that team that becomes a 40-minute team. We’ve been that team that’s played 30 minutes, and I’m so proud of this group because they stayed focused and stayed locked into what we needed to do.”

Mississippi State (10-9) had played in the last five SEC Tournament championship games, winning in 2019 and losing the other four to South Carolina.

This is the first time since 2014 that the Bulldogs failed to reach at least the quarterfinal round, which will put them in the odd position of being on the bubble for the NCAA Tournament when the 64-team field is announced next week.

“Definitely I do think we have some quality wins. The fact that we had such a long break, I’m hoping that the committee would take that into consideration. That breaks the rhythm of any team,” Mississippi State coach Nikki McCray-Penson said. “That’s just something we could not control. We started to get a rhythm there. We beat an LSU team on the road at their place. That was huge for us.”

Khayla Pointer, Fargas’ niece, scored 14 points for LSU and Sarah Shematsi joined Payne to give the Tigers a huge advantage in bench points by adding 13. LSU’s reserves had a 34-15 advantage. Faustine Aifuwa had nine points and 12 rebounds.

Jessika Carter and Rickea Jackson both had 14 points for Mississippi State, and Myah Taylor added 12.

Mississippi State led throughout the first quarter but Payne opened the second with a 3-pointer and a layup and LSU led the rest of the way. Payne had 10 points in the second quarter and the Tigers led 33-29 at the half.

LSU scored the last five points of the third quarter to lead 53-43 and the Bulldogs did not got closer than seven.

“We did some good things, but we also put them at the line too many times. I think Coach said 26 times. We weren’t really disciplined with that,” Taylor said.

The Vicksburg Post welcomes your items for the Game Plan. Submit items by email sports@vicksburgpost.com. Please include the name and... read more