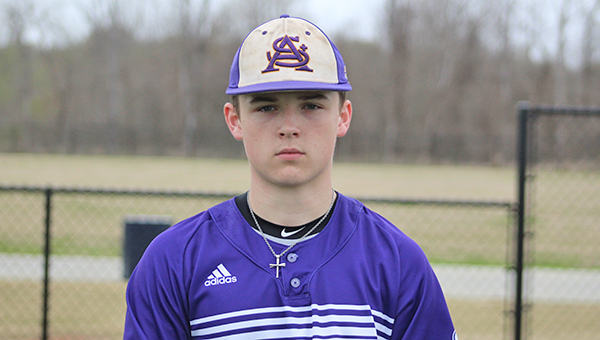 St. Aloysius baseball player Tristan Wilbanks went 2-for-4 with a double, three RBIs and two runs scored in a 12-2 victory over Ethel on Thursday.

St. Aloysius shook off a slow start with one big inning and turned a couple of victories into an actual winning streak.

The Flashes collected five hits, the last a bases-clearing double by Tristan Wilbanks, to score nine runs in the fifth inning and beat Ethel 12-2 Thursday at Bazinsky Field.

St. Al (4-1) won its third consecutive game, with two of those coming by double digits. It will next play Saturday at 2 p.m. at East Rankin Academy in Pelahatchie.

The Flashes entered the bottom of the fifth against Ethel clinging to a 3-2 lead, but the game never reached the sixth. An error and two singles loaded the bases for Conner Paxton, who laid down a successful squeeze bunt. Another error brought in two runs, and an RBI single by Brandon Steed made it 7-2.

After a bases-loaded walk, Wilbanks plated three runs with his double to center field. He then scored on an error off the bat of Adam Francisco to make it 12-2 and end the game by the mercy rule.

Wilbanks finished the game 2-for-4 with three RBIs and two runs scored, while Ben Raines drove in three runs and scored two. St. Al finished with 12 hits as a team. Wilbanks’ double was the only one that went for extra bases.

Steed pitched 4 2/3 innings and allowed two runs on three hits while striking out five batters. He went 1-for-3 at the plate, with one RBI and two runs scored.

Jake Maples racked up eight strikeouts in a five-inning no-hitter, and also drove in three runs at the plate as Cathedral beat Porter’s Chapel in a five-inning, mercy rule-shortened game.

Maples walked a batter and hit another in the top of the first inning, did the same in the second, and then retired the last 11 batters he faced.

Maples also hit a two-run single in the third inning. Paxton Junkin doubled in two runs in the fourth.