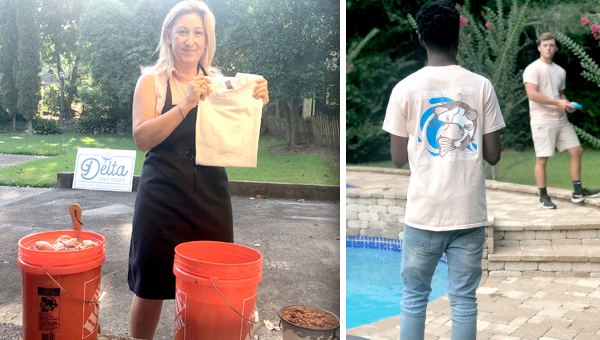 Kendra Reed has no qualms about airing her dirty laundry.

In fact, the Vicksburg resident is thrilled her Delta Dirt Shirts, which are hand-dyed with Mississippi mud, are making the news.

In less than a year, Reed has sold more than 1,000 T-shirts that are dip-dyed in the mud and screen printed with images characteristic of the state.

After becoming bored from the COVID-19 lockdown, Reed said, in June she began playing around and started dying T-shirts with mud.

Reed said she had seen shirts dyed in mud when visiting Hawaii and this is what gave her the inspiration to try her hand at what most people would think strange.

“I went to Hawaii and I noticed that they had these stores with dirt shirts. They were dyed with red Hawaiian dirt and had artwork on them. I thought how cool,” she said, because then one could literally take home a piece of Hawaii.

“And so I thought, ‘Mississippi has that beautiful red dirt and gosh we grow cotton here,’ so it just seemed like the Delta Dirt shirt could make a perfect souvenir.”

After playing around with the idea with the T-shirts and mud, Reed said she decided to attend an entrepreneur boot camp which was hosted by the Vicksburg Warren Chamber of Commerce in partnership with the Small Business Development Centers.

“They helped me think things through,” Reed said.

She said she also focused on having an online presence to market and sell the shirts.

“That is really important, so I spent a fair amount of marketing dollars to make sure that I would have a presence there,” she said, as well as visibility in Vicksburg.

While participating in the boot camp, which was held on Tuesday nights from September through November at Hinds Community College, Reed said she won the Chamber of Commerce’s Entrepreneur Boot Camp contest, which allowed her to purchase a cement mixer and a washer and dryer for her business. The new equipment allowed her to expand the operation.

“At first I was just making the shirts by dipping them in a Home Depot bucket, so now I can use the cement mixer in a bigger trough and it afforded me a washer and dryer I can use just for the shirts,” she said, adding, “You don’t really want to wash your other clothes with dirt.”

Presently, Reed has T-shirts with four different images that have been created by Mississippi artists.

“The first one was done by Drew Harris and has a lot of images of Mississippi including a magnolia, kudzu, an alligator and catfish all within the shape of the state,” she said.

Another, she said, is of two guitars along with the iconic Highway 61 and 49 crossroads signs.

“Drew did this one too, and we took a little artistic license and made it with a guitar and a Fender guitar representing the rock and roll artists Robert Johnson inspired,” she said.

A third is of a steamboat with a hidden “Vicksburg” in it created by Don Jacobs, and the fourth is one that has just been launched.

“It says ‘Greetings from Mississippi,’” Reed said, and it has an image of the guitar Jacobs made for his friend Edward Tree, who played lead guitar with Rita Coolidge.

All of the T-shirts are made of 100 percent cotton and the story of the image is printed on the tags.

Reed said she contracts with the artists and a screen printer, but uses the dirt from her front yard and does all the dying herself.

“I am making them at home and it’s so funny if you drive by my house you’ll see the clotheslines are all set up with dirt shirts across them,” she said.

Reed said one day she hopes to be able to mass-produce the Delta Dirt Shirts and if she continues at this pace her dream will come true. She currently has T-shirts in more than 20 businesses across the state.

“I hope this will inspire people to make lemonade out of lemons,” Reed said. “I was able to find something positive from COVID because it was a gift of time.”