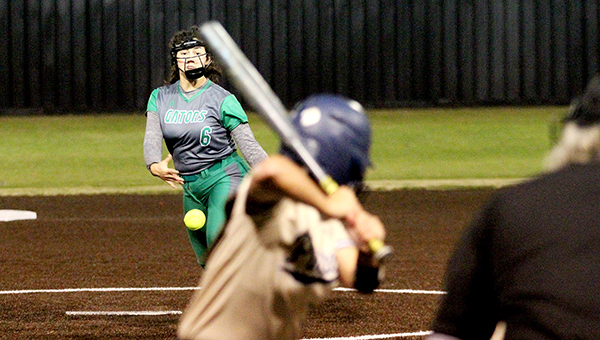 For the second game in a row, Vicksburg High’s softball team found itself on the wrong side of a big comeback.

Pearl scored 14 runs in its last four at-bats to wipe out an eight-run deficit, capping the comeback with a two-run single by Francesca Clark in the seventh inning, as it rallied to beat Vicksburg 14-13 Thursday at the Softball Swamp.

Pearl’s comeback came two days after Vicksburg let a four-run lead slip away in a 9-6 loss to Clinton. The Missy Gators outscored their opponents 13-2 in the first three innings of those two games, and then were outscored 20-6 from the fourth inning on. They led Pearl 12-4 after four innings Thursday when the wheels came off.

Pearl clawed back a run in the fifth inning with an RBI single by Jacia Hayes, and then scored four runs in the sixth.

Vicksburg still led 12-9 entering the seventh, but an error, three walks and a passed ball led to two runs. Kimora Bailey singled in the tying run, and Clark followed with her two-run single to put the Pirates ahead 14-12.

In the bottom of the seventh the Missy Gators had a chance to win it. Sha’Niya Lockridge hit an RBI double to cut it to 14-13 and put runners at second and third with two outs. Makyia Adams then hit a fly ball to deep right field that was tracked down by Pearl’s Olivia Russell for the final out.

Lockridge finished the game 4-for-5, with two doubles, four RBIs and two runs scored. Jamie Ward also had four hits and four RBIs, and scored a pair of runs.

For Pearl, Clark had three hits and four RBIs, Jain Coleman went 2-for-4 with three runs scored, and Bailey went 4-for-4 with two RBIs. The Pirates took advantage of 12 walks issued by Vicksburg’s pitchers. The Missy Gators also committed four errors, while Pearl had five.