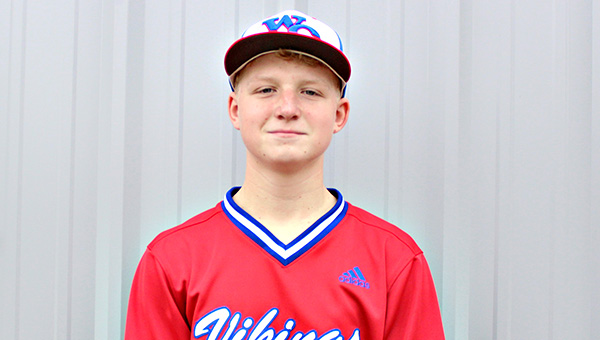 Warren Central baseball player Joey Greer drove in the go-ahead run with a fielder’s choice in a 7-5 win over Richland on Saturday.

It wasn’t easy, but the Warren Central Vikings finally found their way into the win column on Saturday.

The Vikings scored five runs in their last three at-bats to come from behind and beat Richland, 7-5, on Saturday for their first win of the 2021 baseball season.

Warren Central (1-5) only had four hits, but made the most of them and found other ways to score runs. A walk, two hit batters, a passed ball and a fielder’s choice off the bat of Joey Greer brought in two runs in the fifth inning to give WC its first lead of the game, 6-5.

Braxton McCurley hit an RBI double in the bottom of the sixth to give the Vikings some breathing room they sorely needed. Richland loaded the bases with two outs in the seventh inning before Jack Wright struck out Carson Rimes looking for the final out of the game.

Ismael Trujillo went 2-for-4 with a double, two RBIs and one run scored to lead Warren Central’s offense. Spencer Elwart also singled and scored a run. The Vikings overcame deficits of 3-0, 4-2 and 5-4 to win.

Bo Broome pitched two innings of scoreless relief to earn the win, and Wright struck out the only batter he faced to get the save.

Marcus Jackson went 4-for-4 with four RBIs for Richland.

Warren Central next plays Tuesday at 7 p.m., at Germantown.

John David Gunn struck out 12 batters and only allowed two hits in 6 2/3 innings for Central Hinds. He also had a double and an RBI.

John Wyatt Massey reached base twice on a double and a walk for Porter’s Chapel (2-4). He also started on the mound and pitched three innings, allowing four runs on four hits and a walk, with four strikeouts.

PCA was shut out for the second game in a row, after scoring 30 runs in its previous three games. It will host Central Hinds in the second half of a home-and-home series Wednesday at 6 p.m.

East Rankin 12, St. Aloysius 2
Brock Tullos went 3-for-3 with two doubles, two RBIs and three runs scored, and East Rankin Academy scored in every inning on its way to a run-rule victory over St. Aloysius on Saturday.

Tate Owens was 2-for-3 with one RBI and two runs scored, and Ben Carter drove in two runs for East Rankin, which pounded St. Al for 12 hits.

Tristan Wilbanks drove in two runs with a double in the first inning that put the Flashes ahead 2-0. East Rankin answered with three runs in the bottom of the first, three in the second, four in the third and four more in the fifth.

St. Al (5-2), which beat Ethel 4-3 on Friday and was playing its third game in three days, had a four-game winning streak snapped. It will play again Monday at 6 p.m., against Indianola Academy at Bazinsky Field.

Morton 9, Vicksburg 7
The Vicksburg Gators nearly pulled off a miraculous comeback Friday against Morton, but came up a bit short in the end and lost their second game in a row.

The Gators entered the seventh inning trailing 9-3 and scored four runs. Terrance Johnson hit an RBI double and scored on a single by Derrick Brown, and three Morton errors kept things rolling. Morton finally got Tyler Sanders to hit into game-ending fielder’s choice to squash the rally, however.

Brown finished the game 2-for-4 with one RBI and one run scored for Vicksburg (1-2), which only had five hits but stayed in the game thanks to nine errors committed by Morton and eight walks by its pitchers. None of Vicksburg’s runs were earned.

The Gators will visit Natchez on Tuesday at 6 p.m.

A Champion at Last: Hall wins Run Thru History…