An eloquent historian: Community mourns the loss of the iconic Gordon Cotton 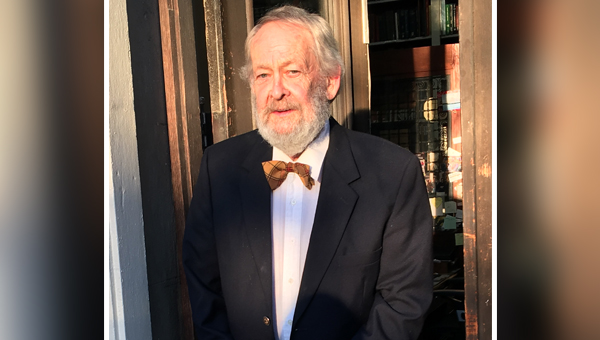 Gordon Cotton, a Vicksburg and Warren County icon who spent a lifetime learning and sharing history, himself made history in the way in which he did it.

He was a man steeped in Southern heritage, educated in history and eloquent in his ability to share it, both in person and in the written word. He was cherished, beloved, respected and now, missed. Cotton died Sunday at the age of 84.

“Among everything, he was a teacher,” said Karen Gamble, former editor of The Vicksburg Post, but more importantly, a life-long friend of Cotton. “I spent an hour on the phone with him Friday. He was so upbeat, excited. We were discussing the plans for his fifth 80th birthday.”

Cotton would have marked his 85th birthday on April 4.

Cotton was born in 1937 and raised in Campbell Swamp at Yokena in southeastern Warren County. He earned a bachelor’s and master’s degree from Mississippi College and taught at Jett, Redwood and Warren Central High School, as well as at was then Holmes Junior College.

In addition to his dynamic historical works that lined the pages of The Vicksburg Post for years, Cotton was the author of more than 17 books detailing local and regional state history.

“This morning,” Dee Hyland said Sunday after learning of her friend’s death, “I feel — knowing Gordon was a very strong Christian, helps, but I am feeling sorry for myself because I will miss him so. He was a dear, dear friend and I loved him dearly.”

Cotton long served as director of the Old Court House Museum, and was described by friends as a “walking encyclopedia.” But it is not the stories he could share that will be missed, it will be the gregarious soul that lived and shined within.

“I’ve known Gordon since I was in high school and of course he is one of the most widely known and respected people in town and really all over the South with his historical connections and the work he had done at the newspaper with his (weekly Vicksburg Post) column,” former publisher of The Vicksburg Post Pat Cashman said. “He was loved by so many people around this area and so knowledgeable — the books he has written, he is just an encyclopedia of knowledge of all the history here. He was sort of the walking textbook — he knew everything about the people here.”

Bubba Bolm, director of the Old Court House Museum, who worked with Cotton and later succeeded him, said “Gordon’s passing is a huge, huge loss for our city, state and beyond. We will miss him greatly. He was a great historian, teacher, and a friend whose stories about our community will continue to live on.”

“We were kindred souls and immediately loved each other and have been just close, close friends ever since then. He is the reason I wanted to serve on the Board of Directors of the Old Court House Museum. Gordon was so instrumental in preserving our history and doing such a beautiful job. He was a walking encyclopedia of everything that was Vicksburg and Warren County,”  Hyland said. “As one of my very closest friends, I will miss him terribly.”

“We will remember Gordon as a prolific writer and historian. But as much as he stands apart as one of the greatest storytellers Warren County will ever know, Gordon sets an example to each of us of the power of our story and of our connection to one another,” Barfield said. “He encouraged me to start doing some writing of my own and was overjoyed when my son A.D. sought his help with genealogical research. Gordon leaves a legacy of books and writings that tell our collective history as well as a challenge to keep recording and sharing our personal chapters in the ongoing story of our community life.

“I already miss him dearly, but Gordon will never be fully gone as long as we keep the stories alive,” Barfield continued.

Helen Yates Price, in a letter nominating Cotton for the award in 2004, said he “is an internationally known author and a much-sought-after source of Southern, Mississippi and Vicksburg history.”

Funeral services for Cotton were held Tuesday at Glenwood Funeral Home with burial at Jordan’s Chapel Cemetery on Campbell Swamp Road — near the church built by Cotton and his friend, Hobbs Freeman.

Post writers Tim Reeves, Terri Cowart Frazier and John Surratt contributed to this report. We mourn the loss of a great storyteller, great historian and, most importantly, a great man in Gordon Cotton. We pray for his friends and family in their grief.

Profile 2021: Shifting lines leave monuments out of the…