Racking up the miles: Beacham honored by Run Thru History 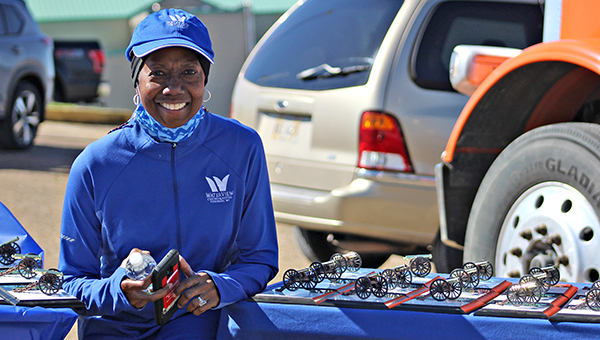 Vicksburg resident Joyce Beacham is the only person to have competed in every Run Thru History 5K since the race walk was added to the event in 1989. (Ernest Bowker/The Vicksburg Post)

The weather was perfect Saturday for the annual Run Thru History, but that has not always been the case.

There have been years when the weather wasn’t pristine, which some used as an excuse to back out before they even got started. Joyce Beacham never fell into that category, though. Rain or shine, hot or cold, she always shows up.

“We have had rain several years. You just never knew what (the weather) was going to do, but that’s OK,” Beacham said. “Because everyone else was going to get wet, too.”

Beacham is the only person who has competed in the Run Thru History’s 5K race walk every year since it began. On Saturday, her commitment to the event that supports the YMCA in Vicksburg was honored during the post-race awards ceremony.

Two people — Gary Sessums and Rodgers Coffing — have participated in every Run Thru History 10K run since it was started in 1980. The 5K race walk was added to the event in 1989, and Beacham is the only person to have done that half of the Run Thru History all 33 years it has been in existence.

Beacham was to receive a special trophy for the achievement, but it did not arrive in time for the race. She still took home one of the prestigious cannon trophies for finishing first in the women’s Senior Masters division. The 64-year-old posted a time of 38 minutes, 41 seconds to finish seventh in the women’s division and 16th overall.

“It felt nice and I am very grateful for it,” Beacham said after receiving the award.

Before she started walking, Beacham was a runner. But that changed after she sustained an injury.

“I started recuperating with walking and it turned into race walking and I found out I was pretty good at it so I kept doing it,” she said.

Unlike walking or speed walking, race walking is an Olympic sport that Beacham has come to excel in.

“In 2017, I was third in the Senior Olympics and got a bronze medal in the race walk,” she said.

Beacham, who is a member of the Mississippi Track Club, also participates in all the Grand Prix races offered, four of which are in Vicksburg, and half of the other “20 to 30” races the club holds annually.

Most recently, she has been competing in marathons and half-marathons, and in 2020 competed in the St. Jude four-part race, which is comprised of a 5K, a 10K, a half-marathon and a full marathon.

To stay race-ready, Beacham said she walks about 25 miles a week, which sometimes consists of taking routes through the Vicksburg National Military Park or on a treadmill.

“I love to race walk,”  Beacham said, which is one of the reasons she has continued to compete in the Run Thru History. “And it’s just a fun thing to do and you get to meet a lot of people and see old friends. It’s just something I love to do.”

Reason to smile: Fully vaccinated people can gather without…