Lady Vikes rally from seven runs down to beat Pearl 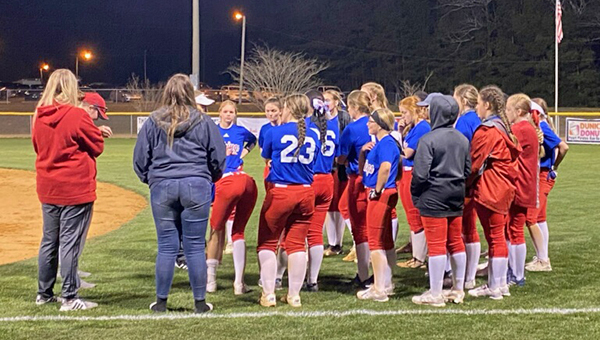 Warren Central softball players and coaches gather in the outfield for a team meeting following their 16-12 victory over Pearl on Monday. (Tim Reeves/The Vicksburg Post)

What looked like it might be a long night for the Warren Central Lady Vikes turned into one they’ll remember for a long time.

The Lady Vikes erased a seven-run deficit by scoring nine runs in the fourth inning Monday, then surged ahead to stay late in the game and earned a wild 16-12 victory over Pearl.

“It’s probably just the fact that you can be down, but you don’t quit,” Warren Central coach Dana McGivney said of her biggest takeaway from the game. “That’s what we’ve been preaching. It doesn’t matter what the score is, we’ve just got to keep working. We’ve got to push harder, and that’s what got the job done.”

Anna Doyle Passions went 3-for-5 with a double and two RBIs for Pearl (5-3), and Jalin Coleman was 2-for-4 with two RBIs and three runs scored. The Pirates scored two runs in the bottom of the first inning, and then strung together four hits — including a two-run double by Juli Manning — in the second to take a 7-0 lead.

Warren Central (2-3-1) only had one hit in the first three innings, but got rolling in a big way in the fourth.

Pearl committed five errors in the inning — it had nine in the game — to lead to nine runs for the Lady Vikes. Mary Evelyn Hossley and Kayleigh Karel hit back-to-back RBI doubles as well, and Warren Central sent 13 batters to the plate while turning a 7-0 deficit into a 9-7 lead.

Despite gaining the lead, the Lady Vikes were hardly comfortable. Pearl scored twice in the bottom of the fourth inning to tie it at 9, and it stayed that way until the sixth. Then two more Pearl errors, as well as two walks and a two-run double by Jill Smith, keyed a four-run rally that put Warren Central ahead 13-9.

An RBI single by Kamryn Morson and an RBI double by Abby Morgan helped extend the lead to 16-10 in the seventh inning, and the Lady Vikes needed the extra cushion. Passions hit a two-run, two-out double for Pearl in the bottom of the seventh to cut it to 16-12 before the Lady Vikes finally escaped the jam and the ballpark with the victory.

Warren Central will return to the field Tuesday at 6:15 p.m. to host Vicksburg. It will be WC’s first game this season as its recently renovated Lucy Young Field, and the second of five games they’ll play this week.

“We just want to improve on tonight,” McGivney said. “We came out tonight and played tight defensively and made errors we shouldn’t be making. We’re still at the point in the season where we’re looking to improve every inning and just seeing what we need to do to get better.”