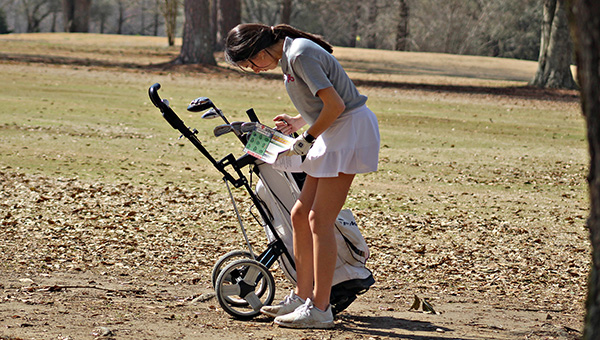 Mobley shot a 76, and was the only one of 25 golfers to break 80. Only seven of them broke 100. Pearl’s Allie Myers finished second, with an 82, and Germantown’s Emma Jennings was third, with an 86.

“I played pretty good. I had a couple mistakes, but I kind of recovered after the mistakes with some birdies,” Mobley said. “I’m proud of all my teammates. They did awesome.”

Mobley’s winning score carried Northwest Rankin to a team victory as well. She and teammate Madelyn Sparks combined to shoot 164, which was 11 shots better than Germantown’s 175. Sparks shot 88.

Germantown had three golfers break 90 — Emma Jennings, Kaylee Jennings (89) and Emma Schirmer (89) — but only the top two scores count toward the team score.

Madison Central’s Bella Bach shot 89 to finish in a tie for fifth place, and was the only other golfer to break 100 on a windy morning.

Tournament host Warren Central’s three golfers finished within five shots of each other. Haley Oldenburg and Kathryn Wong both shot 117 to tie for 18th place, and Jane Hopson shot 122 to tie for 20th with Brandon’s Addison Nash.

Warren Central’s next tournament is after spring break, on March 22 at Castlewoods Country Club in Flowood. It will host two more girls’ tournaments this season, April 8 at Vicksburg Country Club and the Region 4-6A Tournament April 20 at Clear Creek.

Warren Central’s boys’ team will play its Viking Invitational Thursday at Clear Creek, beginning at 9 a.m., and then host a tournament April 8 at Vicksburg Country Club.