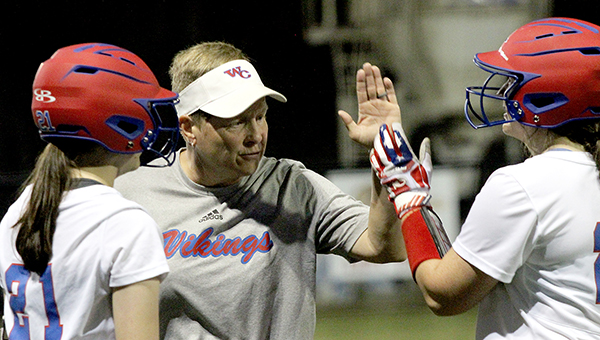 Lady Vikes come from behind — again — to beat Vicksburg

With a roster loaded with freshmen and sophomores, one of the early-season goals for Warren Central’s softball team was to build some wins and confidence. Their last two games have certainly helped in that regard.

Jenn Smith went 2-for-4 with a double, triple, two RBIs and two runs scored, pitcher Abby Morgan allowed one unearned run in three innings, and the Lady Vikes overcame a big deficit for the second straight game to beat Vicksburg High 9-5 on Tuesday.

“We’re still not firing on all cylinders at the beginning. But, after (Monday), I think it gave us a little bit more confidence that even if we were down we were still OK and still in the ballgame. Nobody put their head down and started pouting just because we were down. It was more like it’s time to flip the switch and get started,” Warren Central coach Dana McGivney said.

Vicksburg, meanwhile, was on the wrong end of a big comeback for the third time in four games. It has let leads of four, eight and four runs slip away in three of its losses, and had most of a five-run lead erased in an 8-7 win over Franklin County last week.

Despite that troubling pattern, Vicksburg coach Brian Ellis said he’s seen more good than bad during the opening portion of the season.

“We’re coming around. We’ve blown some leads, yes, and we’ve walked too many. The thing about it is, we’re not going backward. Regardless of having some leads and losing the ballgames, we’re still going forward,” Ellis said. “We’re learning from that. I see things every day that we’re getting better at. I’ve got a lot of young kids that I’ve put a lot on their shoulders to come in at the varsity level, and they’re doing a tremendous job.”

Lili Kistler hit a two-run single in the top of the first inning Tuesday, and two more runs scored on an error in the third inning to stake the Missy Gators to a 4-0 lead. Then, in the bottom of the third, Warren Central started its comeback.

Smith’s two-run triple and an RBI triple by Annalyn Nevels keyed a four-run rally that tied the game. Kayleigh Karel hit a sacrifice fly in the fourth inning, and a bases-loaded walk brought in another run to give the Lady Vikes a 6-4 lead.

The Missy Gators got a run back in the top of the fifth on a sacrifice fly by Charlie VanNorman in the fifth, but a double by Smith, an error, and two RBI ground outs in the bottom half allowed Warren Central to push the lead back to 9-5.

“(Pitcher Lexi Kistler) got a little bit tired and she was getting behind in the count, and having to throw the ball over the middle of the plate. They jumped on a few balls,” Ellis said.

Vicksburg only had one base runner in the last two innings. Avery VanNorman led off the sixth with a single, but was erased on an inning-ending double play when WC shortstop Sarah Cameron Fancher snagged a line drive and doubled her off second base.

While the Missy Gators faded late in the game, McGivney said she was happy with how her Lady Vikes got stronger.

“I think we have to see the pitcher throw. We’ve got to be more confident and more patient at the beginning of the game, as opposed to waiting until the middle of the game,” McGivney said. “With more game experience it’ll get easier and it’ll get better. I’m happy with how they’re improving every game.”