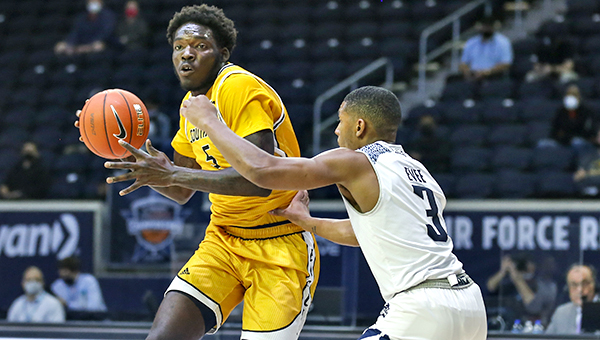 FRISCO, Texas — It was a game of runs all night to begin the 2021 Conference USA men’s basketball tournament, and Rice got the last one.
The Owls held Southern Miss without a field goal over the last 6:24, and simultaneously went on a 19-3 game-ending run to beat the Golden Eagles 61-52 in the first round of the C-USA Tournament on Tuesday.
Rice advanced to play Marshall Wednesday at 6 p.m., while Southern Miss’ season ended with an 8-17 record.
“This last game is always tough,” Southern Miss coach Jay Ladner said. “Only twice in my coaching career have I not lost the last game, and everyone does. The others are the same as tonight, and they’re especially tough for the seniors. It’s a hurt locker room.
“When a team is invested in what’s going on, it hurts you and your staff. A team or player that doesn’t care won’t be hurt. There are a lot of tears in there, and it makes me proud of our program. We just have to keep working to get better.”
Max Fielder ecorded his eighth double-double of the year for Rice, recording game-highs of 17 points and 11 rebounds while setting a career-high with four steals. Quincy Olivari had nine points and 10 rebounds, while Travis Evee and Chris Mullins scored 12 points apiece.
The Owls (14-12) got a friendly roll on a top-of-the-key 3-pointer by  Cavit Ege Havsa with 4:28 left, and the 52-49 lead was their first since 17:18 of the half. They scored the next seven points as well, to go up 57-49 on a jumper by Havsa with 1:25 left, and were not threatened again.
“It was really big (to get this win),” Rice coach Scott Pera said. “I keep talking to our guys about knocking down barriers, and we’ve continued to do that now. This is the first time that we got this one and it was another barrier that we needed to knock down. I’m really proud of their effort and how tough they were down the stretch.”
DeAndre Pinckney led Southern Miss with 14 points. Tyler Stevenson scored 12 and Tae Hardy had 11 points and six rebounds. The Golden Eagles, though, were just 2-for-14 from 3-point range in the game and missed their last seven shots overall in the final 6:24.
Rice, which entered as the league’s second-best 3-point shooting team, was 1-for-8 at the break before going 6-for-12 in the second half.
“Rice was 0-6 when scoring 65 points or less, and I told our guys we would win this thing if we did that,” Ladner said. “We got them to 61 and we went the last six-plus minutes without a field goal, and to that point, we had everything going for us offensively. It reminded me of the FIU win in that second half. Rice called that timeout, and typically we had been in comeback situations. It was something we weren’t used to at that moment.”
Conference USA Tournament
At Frisco, Texas
March 9
Rice 61, Southern Miss 52
March 10
UTSA vs. Charlotte, 5:30 p.m.
Rice vs. Marshall, 6 p.m.
Florida Atlantic vs. UTEP, 8:30 p.m.
Middle Tennessee vs. North Texas, 9 p.m.
March 11
UTSA-Charlotte winner vs. Western Kentucky, 5:30 p.m.
Southern Miss-Rice-Marshall winner vs. UAB, 6 p.m.
Florida Atlantic-UTEP winner vs. Louisiana Tech, 8:30 p.m.
Middle Tennessee-FIU-North Texas winner vs. Old Dominion, 9 p.m.
March 12
Semifinals, 11 a.m. and 2 p.m. (CBSSN)
March 13
Championship game, 8 p.m. (CBSSN)