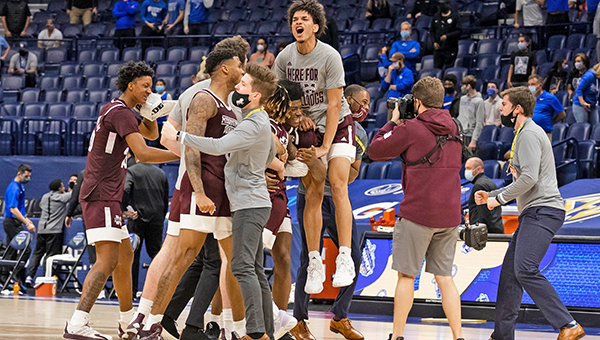 NASHVILLE, Tenn. (AP) — Iverson Molinar scored eight of his 21 points in the final 3:07 to erase a five-point deficit and Mississippi State held off Kentucky 74-73 on Thursday in the second round of the Southeastern Conference tournament.

Mississippi State made just 3 of 14 shots from 3-point range until Molinar sank 3s on two straight possessions to retake the lead at 72-71 — after the Bulldogs led by as many as 15 earlier in half. He had a 3 roll off on their next possession and Olivier Sarr gave Kentucky a 73-72 lead at 1:18.

Molinar, an 81 percent free throw shooter, made two with 7.1 seconds left for a one-point lead. Davion Mintz dribbled it down the court and found a hot-shooting Dontaie Allen on the wing but the shot bounced off the rim.

Mississippi State (15-13) advances to face top-seeded and No. 6 ranked Alabama Friday at 11 a.m. The Bulldogs lost both of the regular-season meetings, by eight and five points.

“I’ve never lost this many games in my life in basketball consecutively like this,” Mintz said. “I know other guys on this roster haven’t, either. But now you know how it feels. You don’t want to climb back into that hole. You don’t want that pain to come back.”

The last time Kentucky was out of the Big Dance was in 2013 after going 21-12 — then was promptly bounced from the NIT by Robert Morris in the first round. Don’t look for the Wildcats in any postseason tourney this year. It’s the program’s first losing campaign since going 13-19 in 1988-89, one that approached historic proportions as Kentucky’s worst since the 1926-27 squad began 1-8 on the way to a 3-13 ending.

“We were a couple of wins away from being a team, even with a bad record, we were right there,” Kentucky coach John Calipari said. “But at the end of the day, you’ve gotta win games and you’ve gotta be tough and you’ve got to play winning basketball. … We were never able to get fully engaged in that.”

Mississippi State dominated the inside in the first half, outscoring Kentucky 36-12 in the paint and outrebounding them 29-15. Six-foot-11 senior Abdul Ado scored 12 first-half points, and forward Tolu Smith had nine points and seven rebounds. Ado made all six of his shots as the Bulldogs shot 57.6 percent while holding Kentucky to 32.4 percent.

But Allen, a freshman, led Kentucky’s second-half comeback with 20 of his 23 points and five of his six 3-pointers.

Allen sank his sixth 3-pointer with 6:22 remaining to give Kentucky its first lead of the game at 65-64, capping a 12-2 run. A minute later, Mintz made his fourth, following an offensive rebound, to make it 71-66.

Kentucky made seven of its first 11 3-pointers of the second half.

Mintz had 16 points and eight assists and Sarr added 14 points for Kentucky. Terrence Clarke, a top-10 national recruit in the 2020 class, played in his first game sine Dec. 26 due to an injury and scored two points in 10 minutes.

Allen scored a career-high 23 points with seven 3-pointers in the only regular-season meeting between the teams — a 78-73 double-overtime victory for Kentucky on Jan. 2. Kentucky coach John Calipari was ejected after being issued consecutive technical fouls with 9:04 left in regulation.