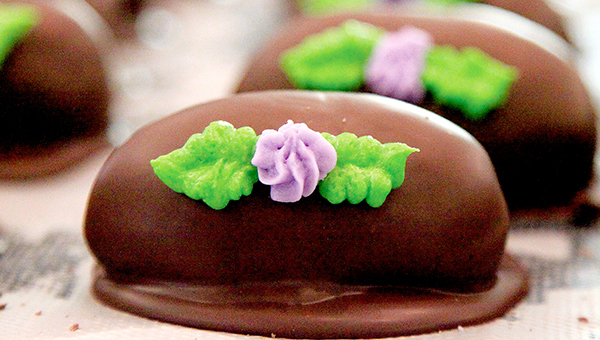 Gibson Memorial ‘egg factory’ back in business after a year away

After a one-year absence, they’re back.

March 22, as it has happened every year but one since 1981, the church fellowship hall at Gibson Memorial transforms into an egg factory, where fondant fillings made of sugar, water, and flavoring are molded into eggs, dipped in either milk or white chocolate, decorated and boxed for sale to raise funds for the church.

The lone year no eggs were made, church member Mary Westbrook said, was 2020, when the COVID-19 virus was affecting Warren County.

The idea for the eggs came from Gene Woodland, who was the church organist in 1981. Woodland’s sister in West Virginia said her church made chocolate eggs and Gibson Memorial member Marie Grayson started the tradition here.

This year, the church members who volunteer will produce about 1,600 of the four-ounce eggs, which come in flavors of peanut butter, vanilla, coconut, maple nut, almond, almond coconut, peanut butter/Butterfinger, raspberry and chocolate. After they’re dipped, each egg is decorated with leaves and a flower.

Westbrook said there are two reasons for the eggs’ success — “They taste good and we can personalize them. Peanut butter is the most popular. We sell more peanut butter eggs than the rest of the eggs combined.”

The production process involves a row of tables covered with paper, which hold several rows of eggs. A Crockpot holds a container of milk chocolate for dipping.

Who does what during the process, Westbrook said, “Depends on who shows up.”

“We have men who do a lot of the mixing (of the fondant) because their hands are stronger and we mix it by hand with gloves,” she said.

Several of the men also help with dipping the eggs, using a long fork to hold the egg while it gets a chocolate bath. The a process can take up to 30 seconds.

What makes the process enjoyable, Westbrook said, is the opportunity for the church members to have fellowship while they’re making the eggs.

“It’s being together, and this year probably more than usual,” she said. “Although there are some people who helped in the past probably won’t because of COVID-19.”

The eggs are $3 each and orders are filled on a first-come, first-served basis.

Eagle Lake porches to be decorated for St. Patrick’s Day

The Eagle Lake community will celebrate St. Patrick’s Day with a Mardi Gras flair when the Krewe of Porches holds... read more