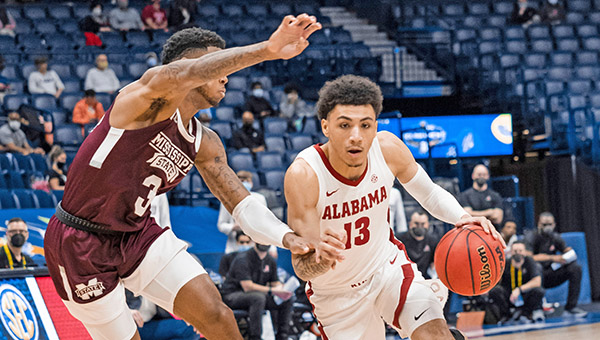 NASHVILLE, Tenn. (AP) — Playing as the Southeastern Conference tournament’s team to beat for the first time since 2002, Alabama seemed intent on proving its worth — early, quickly and effectively.

Jaden Shackelford had 13 points, Jahvon Quinerly added 14 off the bench and top-seeded Alabama blew out No. 9 seed Mississippi State 85-48 on Friday in an SEC Tournament quarterfinal.

The No. 6-ranked Crimson Tide (22-6) will face Tennessee in Saturday’s semifinals. Tennessee beat Florida 78-66 in another quarterfinal on Friday.

Mississippi State (15-14) awaits to see its postseason destination — either a low seed in the NCAA Tournament or, more likely, a berth in the 32-team NIT.

Alabama followed a couple of small early runs with a 17-0 surge over five minutes for a 43-13 cushion just before halftime. The Tide also swarmed the Bulldogs defensively, scoring 24 of 30 points off 14 first-half turnovers and holding them to 30 percent shooting overall.

“Defensively, I thought we were really locked in for a good part of that game,” Alabama coach Nate Oats said.

As expected of the nation’s second-ranked perimeter team, a whopping 13 3-pointers propelled the Tide’s explosive attack with Shackelford and John Petty Jr. leading the way. Shackelford made 3 of 6 from deep in finishing 5-of-12 overall from the field. Petty hit 3 of 7 from 3-point range, including consecutive left-corner jumpers during the big run, for nine points.

Quinerly was 6-of-8 shooting with two 3s. SEC player of the year Herbert Jones had eight points, seven rebounds, seven assists, three steals and two blocks in 17 minutes. Juwan Gary made all four shots for 11 points as the Tide’s bench routed the Bulldogs 47-5.

Alabama shot 49 percent in winning its fourth consecutive game and third this season over the Bulldogs.
Not bad considering the early-morning wakeup call and tipoff.

“There was a lot of questions about us coming out in these early games,” Petty said. “Previously we didn’t really do too good. But I feel like our guys did a great job getting up this morning, getting real locked in and it showed out there on the court.”

“The ball was moving,” he said. “We made shots, but we didn’t shoot it like unbelievably well — 36 percent is probably a little below average. But we shot it well enough and we took care of the ball.”

Iverson Molinar scored 18 points, Tolu Smith had 11 and Abdul Ado grabbed 11 rebounds for Mississippi State, which outrebounded the Tide 43-35 but finished just 1-of-19 from long range and committed 18 turnovers that led to 30 points for Alabama.

The loss was especialy hard to accept for Bulldogs coach Ben Howland, whose team had lost the two regular-season games by single digits.

The Bulldogs trailed 47-19 at halftime. The 28-point margin was the largest at halftime in any SEC Tournament game since 1979.

“To get beat this badly was really, really a bitter pill,” Howland said. “We were 1-of-19 from the 3-point line and you’re not going to win many games doing that.”