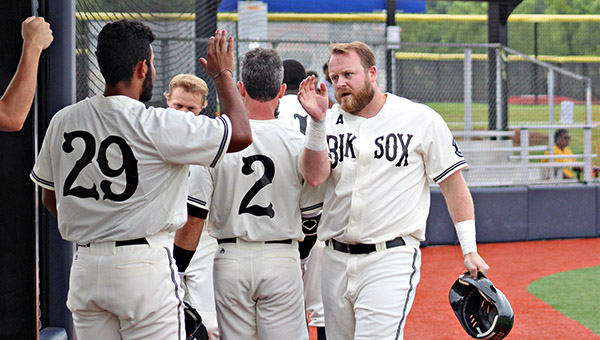 Hattiesburg Black Sox player Eric Wilks, right, celebrates with teammates after scoring a run in a game against the Jackson 96ers in July 2020. The Black Sox are part of the Magnolia Baseball League, an adult baseball league that will play at Sports Force Parks this spring and summer. (Ernest Bowker/The Vicksburg Post)

Last summer, the Hattiesburg Black Sox set up shop in Vicksburg. This year, they’re adding some expansion teams and looking for talent.

The Magnolia Baseball League, an adult league that has been based in the Jackson area in recent years, will move to Vicksburg’s Sports Force Parks for the 2021 season. Open tryouts will be held Sunday at 1 p.m. at Sports Force Parks to help fill some of the rosters.

“We took over the adult league in Jackson and since Sports Force is the best place in the state we decided to move it all to Sports Force,” said Trey Aby, the coach of the Black Sox and the current commissioner of the Magnolia Baseball League. “There’s a lot of adult teams across the country, and a lot of people want to play.”

Aby said the Magnolia Baseball League will have six to eight teams, with games beginning April 11. Most games will be played on Sundays.

There is no fee for players to try out, although they must pay a $10 entrance fee to Sports Force Parks. No current college players are permitted to play because it could affect their NCAA eligibility. Players must also wear either tennis shoes or rubber cleats on the artificial turf fields. No metal cleats are allowed.

“If somebody is wanting to enter a team, that’s cool, too,” Aby said.

The Black Sox are a top-flight amateur team comprised of former minor leaguers and college players, including several from Warren County. It has won three consecutive Mississippi amateur state championships, and seen in 12 years.

Aby said the Black Sox will play in the Magnolia Baseball League until their summer tournament schedule kicks in. And, while they play for high stakes, the rest of the league is competitive but generally relaxed.

“For the league, it’s come one, come all,” Aby said. “Most of the time it’s fun, it’s baseball, and it’s good. It’s somewhat competitive. Some of the guys go out to have fun like it was when they were kids. You don’t have to have the baseball acumen of Johnny Bench to come play.”
At its height, Aby said, the Magnolia Baseball League had more than a dozen teams scattered across Mississippi. It had faded in recent years, but he hopes to help it grow again.

“It used to have teams in other cities. There were 15 or 16 cities with teams at one point,” Aby said. “I would like to see it get back to that, where you have teams from Hattiesburg, Vicksburg, the Coast, all these places. Anything to make it bigger and better.”

For more information on the tryouts or the Magnolia Baseball League, visit the Hattiesburg Black Sox’s official page on Facebook or call coach Trey Aby at 601-454-4713.