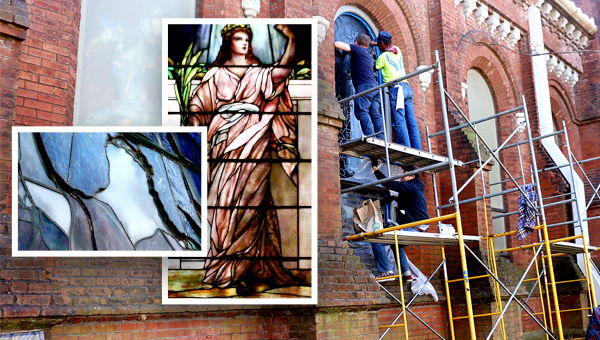 A crew from the Pearl River Glass Studio in Jackson works to restore the stained glass windows at the Church of the Holy Trinity. The church is in the process of a Window Restoration project that includes having all 32 of the stained glass windows in the church’s nave, six of which are Tiffany windows, restored. The project will be done over a two-year period. (Terri Cowart Frazier/The Vicksburg Post)

The Church of the Holy Trinity is known for its stained-glass windows.

Visitors from near and far make their way to the church’s nave to admire their beauty.

But after years of dirt and grime build-up and the yellowing of the protective covers that were placed over the windows more than 50 years ago, it’s time to clean up and rehab what church member Steve Saunders said was “one of the church’s most cherished assets.”

Given in memory of a church founder or beloved member, 32 stained glass windows line the walls of the church’s nave, depicting images that include those of Christ, saints, angels and biblical scenes.

Comprised of four basic types, the windows represent traditional stained glass of German, British and American styles. Six were made by the studios of Louis Comfort Tiffany in New York.

“There are only 11 Tiffany windows in the state of Mississippi and six of those reside in Holy Trinity church,” Saunders said.

Discussions to have the windows restored and preserved for the next generation had been ongoing, Saunders said, but it wasn’t until the pandemic hit that the reality of having work done became evident.

“During this past year with COVID shutting down the church for six months, during December I asked if I could light up the church and the windows during the Christmas holidays to shine some light on a dark situation (COVID),” Saunders said. “The windows were so beautiful but we could tell they had lost their luster due to a century of dirt and grime as well as the yellowing of the protective covers.”

Also, pieces of one of the Tiffany windows had fallen out.

That’s why Saunders, who serves on the Vestry and is the chairman of the church’s finance committee, said he began to generate interest in having the windows refurbished. In doing so, he became the leader for the window restoration project. In February, a contract was signed with Pearl River Glass Studio in Jackson to perform the work.

Saunders said the Pearl River Glass Studio has experts who are trained in stained glass design and restoration.

“They are noted in the southeast as one of the premiere stained glass companies in the country. They have performed restoration and preservation work throughout the southeast and were selected as the contractor to restore the over 100 stained glass windows in the Old Capitol in Jackson,” Saunders said.

The church’s contract, Saunders said, “Consists of carefully cleaning the windows inside and out with soap and water to remove the decades of dirt and grime. Following the thorough cleaning, the exterior of the windows will have new waterproofing cementing compound applied and then the windows will be cleaned again to remove excess compound.”

The glass will then be polished with a buffing wheel and any damaged or missing glass will be repaired. Any touch-up of painted surfaces that have lost enamel will be done as well.

Saunders said the process to clean the Tiffany windows differs from the others.

While most church windows are made with a single pane of glass painted with enamel paint and then fired in an oven, the Tiffany windows have layers of glass.

After all the windows are cleaned and repaired, Saunders said, new clear laminated safety glass (much like a car windshield) will be installed, replacing the old, yellowed polycarbonate protective coverings.

In the process of restoring the windows, Saunders said, the workers — who are “highly talented and experienced” — claimed they had never seen Tiffany windows like those at Holy Trinity.

“They were astounded by the size and by both the complexity and beauty of the Tiffany windows,” Saunders said, adding, “Tiffany windows of this age are very rare in the South and are a true treasure to behold.”

The restoration of the stained glass windows, Saunders said, will be done over a two-year period of time and broken down in scope by walls.

“The North wall (South Street) and West wall (Monroe Street) will be done this year and the East and South walls will be done in 2022,” Saunders said. “All three windows in the East wall and one of our Tiffany windows in the South wall will be removed and taken to the Pearl River Glass studio where they will be put on a light table where workers can better access the windows to clean and repair them.”

Saunders said the church had some money to get the ball rolling on the $300,000 project that will be funded internally. However, the church will also conduct a capital campaign to raise funds to complete the project.

“Additionally, we have applied for a grant from the Mississippi Delta National Heritage area which we will know if we get later this month,” Saunders said.

Once cleaning and repairs have been made to the windows and the new clear protective glass is installed, Saunders said, light will be able to shine through and light up the church as it did more than 100 years ago.

“This will also allow the windows to be seen from the street, where the community can once again see the treasure which is the magnificent windows of Holy Trinity Church,” he said.