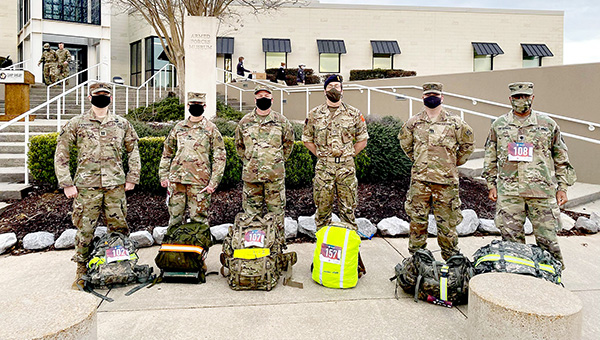 On March 6, a group of Soldiers from the U.S. Army Engineer Research and Development Center made their way to Camp Shelby Joint Forces Training Center just south of Hattiesburg to compete for the chance to earn the esteemed Norwegian Foot March Badge.

To earn the Norwegian Foot March Badge, soldiers must complete an 18.6-mile ruck march within a certain time frame depending on age and gender, all while carrying a 25-pound ruck sack. Not only did each ERDC Soldier finish the march, three of them brought home first-place titles.

“When the ruck march was first mentioned, I thought it might be a wonderful opportunity for team building and challenging ourselves. It was both,” Schlosser said. “The team did great, and we all worked hard to complete the event — 18.6 miles is no joke.”

Originating in 1915, the Norwegian Foot March was originally aimed at mimicking what it is like to be in the field. Today, it has become a Foreign Service badge that can be earned by completing the event to standard.

For the last four months, Dean, an ERDC acquisitions officer, spent his Sundays training in the Vicksburg National Military Park, on the Natchez Trace and other running routes.

“Ruck marching was not only a weekly physical training event but also the primary means to move around the field during training exercises,” said Dean, a former Army infantryman of 19 years. “I have to admit, it sure felt good getting out there and putting the ruck on again.”

“I love physical challenges. I am always looking for ways to push my body to its limit and see just how far and fast I can complete the task,” Dean said, adding that his weekly training was only impacted by ice on the trail during February’s ice storm. “I even took my dog, a 70-lb boxer-mix, on all my training marches as she loves the long-distance jogs and would start pulling me if I slowed down too much.”

All those intense training days paid off for Dean when he took the first-place spot for his age group (males aged 43-49) and 10th place overall.

“Completing this event gives the soldiers and their units something to be very proud of as they track the percentage of the unit that completed it,” Deans explained. “In my opinion, badges like this are important to soldiers because they separate soldiers who earned them from the rest of their peers.”

“It was awesome to be surrounded by soldiers of all ages as we motivated and encouraged one another,” Schlosser said. “I’m proud of everyone who participated and completed the event.”

After being crowned Miss Mississippi in 2018, Asya Branch spent a year traveling the state. She made frequent visits to... read more