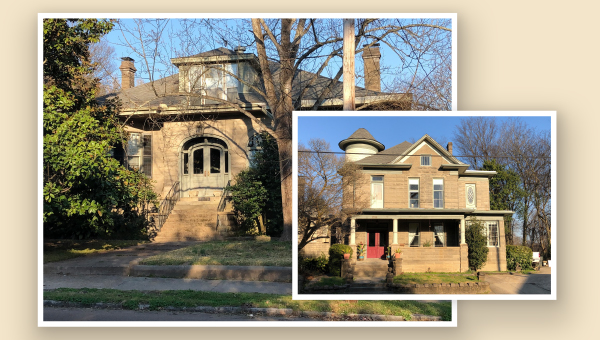 2209 Cherry Street, left, and 2213 Cherry Street, right, are examples of hollow concrete block construction that was used in Vicksburg in the early 1900s.

Looking back: Homes have stood the test of time, proved builders correct

Vicksburg contractors continued to see the use of this new material — hollow concrete blocks — as the future of construction.

The Vicksburg Evening Post reported in March 1906 that the “J. W. Mann, the progressive and up-to-date builder, realizing the necessity of keeping pace with modern construction has erected one of the largest and most complete Cement Block Plants in the South, with a daily capacity of 900 blocks. The plant is located on the Y. & M. V. Railroad (in Vicksburg). Mr. Mann says he will keep about twenty men employed at this plant continuously, at salaries ranging from $1.50 to $3 per day. The plant is under full headway, as the last machinery was received last Saturday. Mr. Mann says he has orders enough on hand now, including the blocks he needs for his own work, to keep his plant going for 60 days, and by that time he feels confident the people generally will be awakened to the merits of this construction for the various reasons which are: first, its inexpensiveness; second, its impervious nature to cold, heat, dampness or anything else as the continuous hollow space in the walls makes it like a bank vault with its dead air space an absolutely non-conductor; third, its beauty, as it is not only ornamental and complete in artistic texture, but it also gives a massive and substantial effect; and last but not least, its everlasting and indestructible qualities, after it is one time properly constructed, as there are records of cement used as far back as 4350 B.C., and it has never been found in any instance that cement work, in any form, after being property worked, has ever deteriorated to any perceptible degree, so any part of a building constructed of this material, will never need any repairs or paint. All the best construction today is being done with cement, as all experienced architects, engineers and builders, agree on the material as being unquestionably the best, they only differ as to the most practical and substantial method of construction.”

Michael J. Donovan was one of the architects who saw the value in designing buildings using the new construction material. He designed two houses that were built in 1908 next door to one another at 2209 and 2213 Cherry Street.

The home at 2213 was built for Dr. George Yerger Hicks and his wife Maud. The two-story late Queen Anne residence was built using the blocks formed with the rusticated stone mold. Dr. Hicks was the city physician in 1907 with part of his job being to locate people who showed signs of smallpox, typhoid fever, and other infectious diseases. He would then have them isolated, the families quarantined, and their houses and yards fumigated.

Another public health initiative by Hicks was to see that the city’s ordinance requiring that all houses in Vicksburg were screened in order to protect their inhabitants from disease-carrying mosquitoes. He announced in the Vicksburg Post in 1907 that this order included all out houses. Dr. Hicks was also the superintendent of the Mississippi Sate Charity Hospital (later Kuhn) in Vicksburg. He died in April 1929 and Maud continued to live in the house until she died in 1960.

The home at 2209 Cherry Street was built for Patrick and Lily Hicks Henry. A lawyer by profession, Patrick Henry represented Mississippi as a member of the House of Representatives in Congress from 1901 to 1903. He also served in the Mississippi Senate from 1888 to 1890 and was a Mississippi delegate to the Democratic National Conventions of 1896 and 1928.  In addition, he was elected to the office of circuit judge in 1900 and served until 1901. Henry was a member of the firm Henry, Canizaro and Henry.

The Hinds County Gazette reported that “two men were killed in Vicksburg early Sunday night as the aftermath of a quarrel over a girl. The dead are Pat Henry, young Vicksburg attorney, and George Whitaker, also of Vicksburg. Dan Cole, also of Vicksburg, is alleged to have committed the double killing. Henry and Whitaker are reported to have engaged in a dispute Sunday afternoon at the Vicksburg ballpark. Later Sunday night after escorting the young lady home, Henry and Whitaker met on the outskirts of Vicksburg and resumed the dispute of the afternoon, stopping their cars to engage in a fistfight. Cole, who accompanied Whitaker, remained in Whitaker’s car. When the fight began, Cole is said to have taken Whitaker’s shotgun which was in the car and firing at Whitaker, hitting him in the face, then turning the gun on Henry shooting him. Both were killed instantly. Cole, who was a good friend of Whitaker, is said to have been crazed by drink.”

Patrick Henry Sr. died in 1993 and by 1935,the Henry home was occupied by Ann and David McCoach, a colonel in the Army.

Both houses remain and their excellent condition appears to prove the builder’s assertion that “the material is unquestionably the best.” More “block” houses next week.

The Church of the Holy Trinity is known for its stained-glass windows. Visitors from near and far make their way... read more