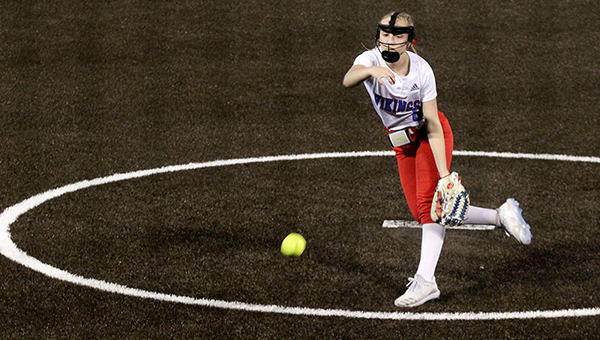 Warren Central’s Mary Evelyn Hossley drove in the final nail — rather run — for the Lady Vikes in a 10-run victory over Enterprise Thursday.

Hossley’s double in the sixth inning — her third hit of the night — scored teammates Sarah Cameron Fancher and Malynn Kelley to give the Lady Vikes a 16-6 lead over Enterprise and ended the game via the mercy rule. Hossley, who also pitched the final two innings of the game to earn the victory, finished the night with four RBIs.

Junior Annalynn Nevels started the game for Warren Central. She struck out five and allowed just one earned run in her four innings of work.

Fancher led the Lady Vikes with four runs in the game. Outfielders Kayleigh Karel and Kelly each had two hits.

For Warren Central, it marked the third straight win, and the second since returning to its home park after missing all of the 2019 season and the start of the 2020 season due to ongoing construction and renovations. The win gave the Lady Vikes a 4-3-1 record heading into Saturday’s tournament in Brookhaven.

Clinton 7, Vicksburg 6
In the first two weeks of March, Vicksburg and Clinton have become very familiar with one another, playing once each week. Unfortunately for the Missy Gators, the meetings have provided disappointing results.

Olivia Guthrie tied the game with an RBI single, and Estrella Constancio was hit by a pitch with the bases loaded to bring home the winning run as Clinton rallied in the bottom of the seventh inning to beat Vicksburg for the second time this season.

In the first meeting, March 2 in Vicksburg, Clinton overcame a four-run deficit to win 9-6. This time, it blew a 5-2 lead in the top of the seventh inning before scoring twice in the bottom half.

The Missy Gators used four hits, the last an RBI single by Lexi Kistler, to score four runs in the seventh inning and take a 6-5 lead. Makyia Adams, Trinity McGloster and Charlie VanNorman also had hits during the rally.

Vicksburg will travel to Brookhaven on Saturday to play in a tournament hosted by Brookhaven High School. The Missy Gators are scheduled to play Enterprise and Bogue Chitto.

NASHVILLE, Tenn. (AP) — Playing as the Southeastern Conference tournament’s team to beat for the first time since 2002, Alabama... read more