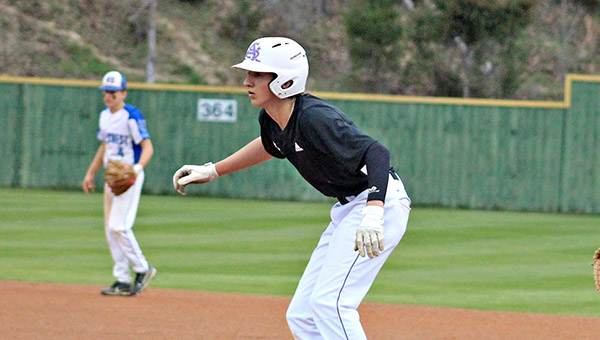 St. Aloysius’ Conner Paxton leads off of first base in the seventh inning of a game against Hillcrest Christian Friday at Bazinsky Field. Hillcrest beat St. Al 1-0 in the first game of a doubleheader, but St. Al won the second game 18-1. (Ernest Bowker/The Vicksburg Post)

The St. Aloysius Flashes learned Friday just how fickle the game of baseball can be.

A day after beating Hillcrest Christian 18-0, the Flashes totaled only two hits and were shut out 1-0 by the Cougars in the first game of a doubleheader at Bazinsky Field.

Will Delaughter and Braden Freeman combined on the shutout for Hillcrest. They walked one batter and struck out three. St. Al did not have a hit until Wes Warnock singled with two outs in the fifth inning.

Hillcrest’s only run came on a solo home run by Breeze Johns in the second inning.

“That’s a loss of focus, for sure. In the game of baseball you cannot look past an opponent. A prime example tonight of how not to focus and not be ready for the game,” St. Al coach Sid Naron said. “It’s early in the season. We’ve got a lot of good leaders on this team and expect to turn it around fairly quickly. But it’s definitely frustrating.”

The Flashes (8-3, 2-1 MAIS District 3-4A) did indeed turn it around quickly. In the second game of the doubleheader, Conner Gaul went 3-for-4 with two RBIs, Conner Paxton drove in four runs, and the Flashes scored nine runs in the first two innings on their way to an 18-1 victory.

Tristan Wilbanks went 1-for-2 with a triple and two RBIs, and also turned in a standout pitching performance. He allowed two hits and one run in four innings, did not walk a batter, and struck out 11. Warnock pitched the fifth inning — the game ended after that via the mercy rule — and struck out the side.

Hillcrest committed eight errors in game two, after having two in the first game.

St. Al outscored Hillcrest 36-2 in the three-game season series, but Naron said the puzzling loss Friday will linger as his team chases a playoff berth in the coming weeks.

“Especially the first conference series, you want to get off to a good start. We did in game one (Thursday), and then we came back today and laid an egg in this first game,” Naron said. “We have to have short term memory loss, let it go and move on. I still think we’re a really good team. Lapses like that, we just have to do better.”