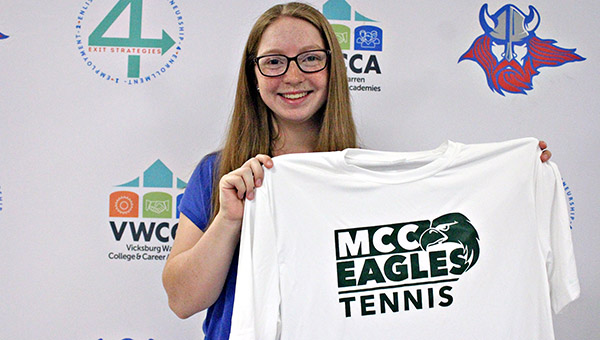 A love of, and skill at, the game of tennis runs in Madison Embry’s family.

“I grew up watching it with my grandmother, and (my aunt) used to play in college,” the Warren Central senior said. “So I feel like I got some of that from (my father’s) side of the family, and from watching it a lot growing up.”

Madison has ably carried on the tradition during six seasons with Warren Central’s tennis team, and will keep it going for at least a couple more after signing with Meridian Community College.

Embry signed back in November, but only recently celebrated the occasion with a small ceremony in a classroom at Warren Central. She said she wanted to keep it low-key, but also admitted to being awed by the accomplishment.

“Unbelievable. Unreal, honestly,” she said of signing. “It does not feel completely real and I don’t think it will until I get there my first day of practice.”

Vicksburg’s Parks and Recreation Department — came to her school to introduce the sport to physical education classes.

Madison did not rush to the court right away, however.

“When Coach Shields was going to the elementary schools and teaching and trying to get kids interested in tennis, he told her to come out,” Emily Embry said. “Several weeks went by and Madison had not come out, so he reached back out to the PE instructor and said I want to get in touch with her parents.

They need to understand that she has natural ability.”

Madison finally did head to Halls Ferry Park to play, and has been a regular there ever since whether it’s for formal tournaments, camps, or just to hit around with friends as she’s honed her skills. In 2019, Embry reached the MHSAA Class 6A state tournament in girls’ doubles.

“I came out on the weekends as well, and I’ve been playing ever since,” she said. “During the summer, seven days a week, I play Sunday to Sunday.”

Last year, another persistent coach recruited her to come to Meridian. T.J. Carter was recruiting Embry when he was an assistant at Jones College, and kept after it when he took over as Meridian’s head coach.

“When I went and I toured, I realized there were so many opportunities for me not just as a tennis player or a student, but as an individual. I was thrilled to be chosen by him for that spot,” she said. “I want to major in criminal justice. I want to be a forensic psychologist. I want to go to Ole Miss after Meridian.”