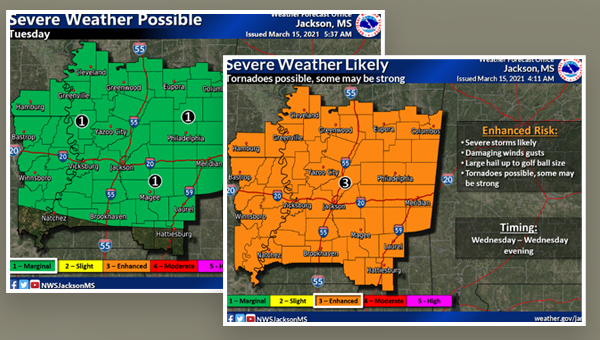 Warren County residents can expect severe weather beginning sometime Tuesday and continuing through Wednesday, according to the National Weather Service.

“Things are a little more dangerous on Wednesday when we have a stronger storm system coming our way from the west and bringing a lot of wind shear,” said Logan Poole, a meteorologist with the National Weather Service Office in Jackson. “We’ll have some instability in place and Wednesday could see all the modes of severe weather possible — a few tornadoes, some large hail, possibly golf-ball-size hail or a little bigger, and winds may be getting into the 70-plus mph range for a few places … even a strong tornado cannot be ruled out that day, so it’s possible.”

The cause of the forecast severe weather is a cold front in the south moving east that is expected to turn north Tuesday as a warm front.

Poole said it is possible Warren County could see some strong thunderstorms Tuesday as the system begins moving back as a warm front, “But it all depends on where the (frontal) boundary moves to. Wednesday’s the day you definitely should have your severe weather plans in place.”

“They need to make sure their alert systems are in place and working, and they have adequate shelter plans,” he said. The only good thing about the storm, he said, is that it looks as if it will be a daytime event. “It’s better if it’s in the daytime because people aren’t sleeping.”

While it is still too early to pinpoint where the higher risk area may exist, Poole said, there is a chance for tornadoes and strong winds in the Warren County area.