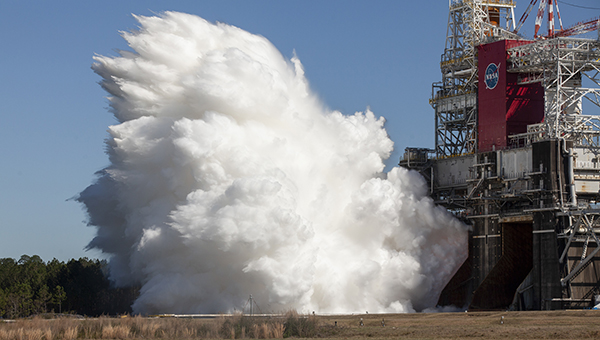 The core stage for the first flight of NASA’s Space Launch System rocket is seen in the B-2 Test Stand during a second hot fire test, Thursday at NASA’s Stennis Space Center near Bay St. Louis. The four RS-25 engines fired for eight minutes during the test and generated 1.6 million pounds of thrust. (NASA/Robert Markowitz)

This time, the four main engines of the rocket’s core stage remained ignited for the full eight minutes. Applause broke out in the control room at Mississippi’s Stennis Space Flight Center once the engines shut down on the test stand.

On the first test firing, the engines fired for just a minute, automatically cut short by strict test limits that were relaxed for the redo. Valve issues also had to be resolved prior to Thursday’s countdown.

The SLS or Space Launch System rocket is what NASA intends to use to send astronauts back to the moon. The first flight is planned for late this year or next, to send an empty Orion capsule going to the moon and back.

With this critical test finally finished — and assuming everything went well — NASA can now send the rocket segment to Florida’s Kennedy Space Center to prepare it for launch.

The four engines tested Thursday actually flew into orbit on NASA’s space shuttles and were upgraded for the more powerful SLS system. The orange core stage is reminiscent of the shuttle’s external fuel tank, which held the liquid hydrogen and oxygen that fed the main engines.