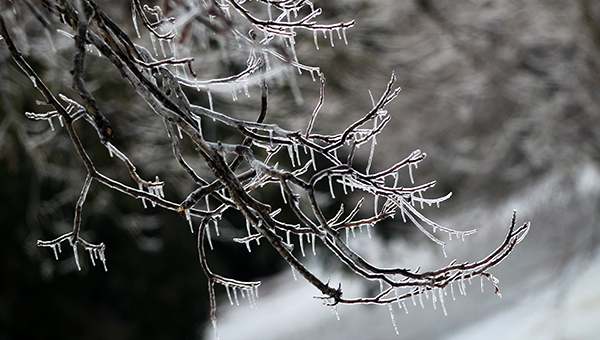 A winter storm in mid-February dumped inches of freezing rain on the area, which led to an accumulation of ice on power lines and trees. (Tim Reeves/The Vicksburg Post)

A Yazoo City company has been hired by the Board of Mayor and Aldermen to help remove debris remaining from the February ice storm.

The board Friday approved a contract not to exceed $18,250 with Shackleford Management Services Inc. to remove the ice storm debris still in the city. The company is expected to help complete the debris removal in two weeks, City Attorney Nancy Thomas said.

“The first of this is to get out and get all the debris up because it makes the city look bad and it’s overworking our public works department because they have to do some other things and this (the contract) will get it up at one time and satisfy some people,” Mayor George Flaggs Jr. said, adding he has been receiving complaints about the debris.

A severe winter storm shut down the city and Warren County from Feb. 16-19, causing water and power outages. Ice-covered trees, limbs and branches fell in some areas of the city, leaving debris along streets and in yards.

The multiple problems overwhelmed the city’s public works department, forcing the board to hire temporary workers. The city has hired five temporary workers overall. Flaggs said the temporary employees do a number of jobs for the city, including debris collection.