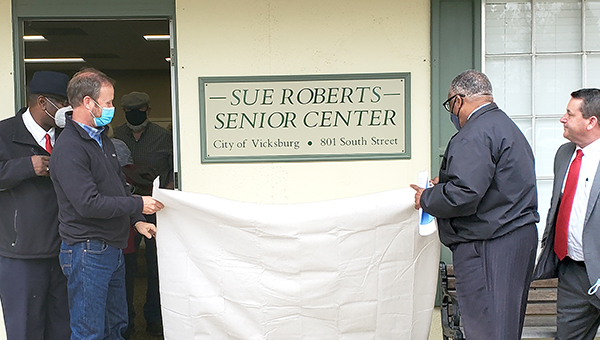 Thanks to the Board of Mayor and Aldermen, “Miss Sue” will never be forgotten.

During a ceremony Friday attended by her family, friends, city officials and some of the city’s senior citizens, the Vicksburg Senior Center building was renamed for longtime city employee Martha Sue Roberts.

The ceremony included an announcement by Mayor George Flaggs Jr. that he planned — if COVID-19 numbers continued to drop — to reopen the senior center on May 3 with certain protocols in place.

“It’s only right, it’s only fitting that we do it, and what a better way to announce that we’re going to reopen the center on May 3 than on the day we honor a lady who was committed to the city of Vicksburg,” he said.

Roberts, who served 40 years with the city, died in September 2019 after a nine-year battle with a gastrointestinal stromal tumor, a form of cancer that led to a terminal diagnosis that she fought through the remaining years of her life. She came to work for the city in 1977.

Flaggs called Roberts “a remarkable lady, but apparently remarkable is an understatement.”

He quoted a biblical passage to describe Roberts, “We should serve and not be served.”

The city, Flaggs said, was honored by Roberts’ service, adding he hoped other city employees would follow the example she set as an employee.

South Ward Alderman Alex Monsour, for whom Roberts worked, said when he first entered his office, “Sue Roberts whipped me into shape and showed me what to do. While she was there (in his office) she was the boss.”

Roberts, he said, “probably had more knowledge of this city and everything about this city than anybody else here. She cared about everything and everybody.”

The people who called his office, he said, weren’t just taxpayers, “She wanted to solve their problem.”

Monsour said the senior center was one of Roberts’ interests, adding she always wanted to make sure it was operating properly.

“She said to me many times, ‘The people have grown up here, they worked here; they made Vicksburg what it is. They deserve a place in their later life where they can come and enjoy company and doing something,’” he said. “There is no other way we can honor Miss Sue than to dedicate this building and this senior center to her.”

North Ward Alderman Michael Mayfield said Roberts at times served as his conscience, getting him to lower his voice and control his language when he was upset.

“She was the kind of person who spent a lot of time trying to do what was right for the city of Vicksburg,” he said. “Everybody who knew her knew that if you had to ask somebody a question that you didn’t have the answer for, you could go to her. If she didn’t have the answer, I guarantee you she would find it.

“I can’t speak enough about the mayor and aldermen for what they did for her when she was sick; they bent over backward for her,” Roberts’ son Wayne said after the ceremony.

He said renaming the senior center after his mother “is a great honor and we’re pleased; words can’t explain how we feel.”